Airtel has started removing FUP (Fair Usage Policy) limit on its broadband plans, a move that seems geared to take on Jio GigaFiber. Initially, Airtel has withdrawn the limit in Hyderabad. However, considering the compelling up to 1Gbps speeds through the Jio offering, we can safely expect a broader rollout of the new development. Notably, there is some fine print attached, so read on. The Airtel plans have also been streamlined in the Hyderabad circle from the originally available five plans to four - starting from Rs. 349 and moving to Rs. 1,299. The New Delhi-based operator last month started offering up to 20 percent discount for subscribers opting for its six-month and yearly broadband plans.

As highlighted on its official site, Airtel is offering unlimited broadband data for each of the broadband plans available in the Hyderabad circle. This means there isn't any data limit until which you can avail the high-speed Internet access on your connection. This is unlike the case if you're using an Airtel broadband connection in any circles other than Hyderabad. For instance, the Rs. 799 broadband plan in Delhi comes with a broadband data limit of 100GB. 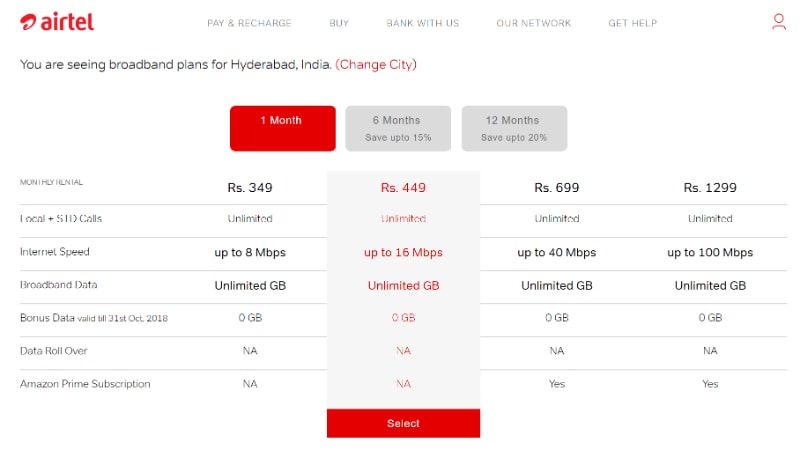 While Airtel broadband subscribers opting the Rs. 349 plan in Hyderabad can avail Internet speeds of up to 8Mbps, the Rs. 1,299 plan comes with up to 100Mbps speeds. These speeds are fair enough to surf the Web or to download documents from an email or in some cases download audio or video files. However, Reliance Jio is promising to deliver as high as 1Gbps of speeds through its Jio GigaFiber network that was launched earlier this week and registrations are set to open on August 15 across 1,100 cities in India.

Now, getting to the fine print. While Airtel says the users will get unlimited GB of broadband data with no speed drop, it does specify a limit. "Unlimited plans are available in selected cities only for non-commercial usage. Commercial usage is defined as usage above 3TB/month," the company revealed in its terms and conditions. That's a pretty healthy limit of 3T per month, but unfortunately, it implies that there is an FUP after all. The line also reveals that the unlimited plans are only available in select cities for now.

As we mentioned, alongside the unlimited data limit, Airtel has streamlined its broadband catalogue in Hyderabad to four plans, as first spotted by TelecomTalk. This includes plans with a monthly rental of Rs. 349, Rs. 449, Rs. 699, and Rs. 1,299.