Jio Fiber Showed Most Fluctuation in Internet Speeds in Q2 and Q3: Ookla

According to Ookla, fixed broadband speeds in India rose significantly by 16.5 percent during the second and quarters of 2019.

Jio Fiber emerged as the fastest fixed broadband service in five of India's largest cities, as per Ookla

Jio Fiber showed the most fluctuation in average data speeds from a prominent dip to 17.52Mbps in August to speeds hitting 41.99Mbps at the time of its commercial launch in September, according to the latest report by Ookla. The report also highlighted that fixed broadband service by the Mumbai-headquartered telecom giant also faced tough competition from not only from arch-rival Airtel but also from ACT Fibernet that topped Ookla's charts in fixed broadband with speeds between 45.31Mbps and 47.74Mbps between April-September 2019.

The report by Ookla said that average fixed broadband speeds in India rose significantly by 16.5 percent during the second and third quarters of 2019 and topped 34.07Mbps in September.

After ACT Fibernet, Hathway grabbed the second position for most of the time with a top average speed of 33.65Mbps. Airtel, on the other hand, surpassed Hathway in September with a mean download speed of 34.43Mbps followed by BSNL and GTPL. 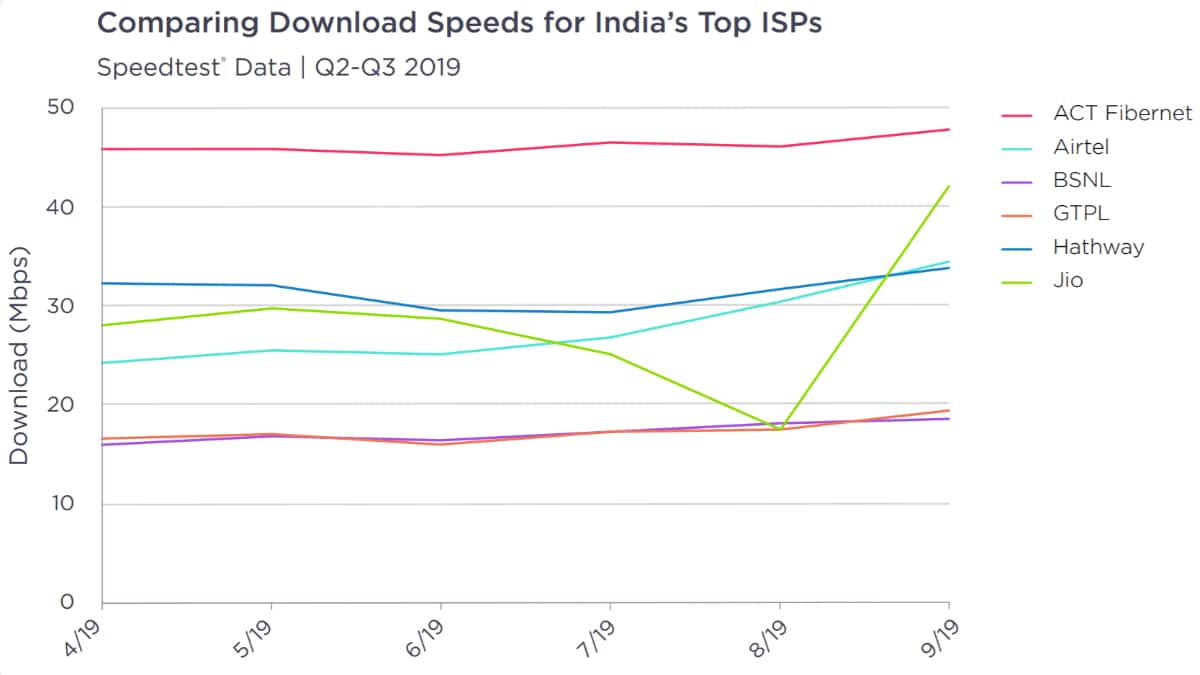 In 15 largest cities in India, the Ookla report mentioned that Jio was the fastest fixed broadband provider in five cities during the second and third quarter. ACT Fibernet, in contrast, was reportedly the fastest in four cities and tied in the fifth. The Bengaluru-based company scored the highest speed in Jaipur and Lucknow during the second and third quarters, while Hathway marked the highest speed score in Chennai.

On the part of mobile download speeds, Ookla claimed in its report that the results were relatively flat in India -- fluctuating between 10.63Mbps and 11.18Mbps during the second and third quarters. The report also emphasised that 4G availability in the country continues to improve with 87.9 percent of availability noted in the second and third quarters.

Jio led the race on the 4G availability front with 99.1 percent, while Airtel came second with 94.9 percent followed by Idea and Vodafone with 87.5 percent and 85.2 percent, respectively.

The Ookla report also included peak time analysis during September and highlighted that Airtel's busy hour performance was almost as fast as Jio's performance in the non-busy hours of the day.

"Despite having the lowest (7.0 percent) decrease in speeds during the busiest hours, Jio's data speeds were the slowest during those times, dropping down to 7.87Mbps. Vodafone and Idea were almost as fast as Airtel, and since the two companies merged, there is a gap in speed difference closing between Airtel and Vodafone," the company said in a statement describing the report.

The latest Ookla report is a result of performance data from over 21 million consumer-initiated tests conducted through the Speedtest platform and coverage data from over 2.5 billion coverage scans on 2.4 million during the second and third quarter of 2019.