Jio Fiber started its commercial operations in September this year

Jio Fiber, the optical fibre-based broadband service by Reliance Jio Infocomm, has surpassed Airtel and reached the third position on Netflix's ISP Leaderboard. According to the data provided on the Netflix ISP Speed Index for the month of November 2019, Jio Fiber offered an average speed of 3.59Mbps, up from 3.56Mbps provided by Airtel. The service owned by Jio existed in the Indian telecom sector for some time, though it kicked off its commercial operations in September to take on the likes of Airtel, ACT Fibernet, and BSNL. Netflix's ISP Leaderboard provides Internet service provider (ISP) rankings based on the measurement of prime time Netflix performance on particular ISPs around the globe

The data available on the Netflix ISP Speed Index shows Jio Fiber outshined Airtel by reaching the third spot on the leaderboard. However, the average speed of Jio's broadband service dropped from 3.63Mbps to 3.59Mbps, as per the ISP data provided by the video streaming service.

While Jio Fiber has managed to counter Airtel, Mumbai-based 7 Star Digital has continued its lead on the Netflix ISP Speed Index with an average speed of 3.65Mbps. Spectra, which operates in regions such as Delhi, Gurugram, Noida, Mumbai, Bengaluru, and Chennai has retained its second rank in the Netflix ISP Leaderboard with 3.61Mbps speed. 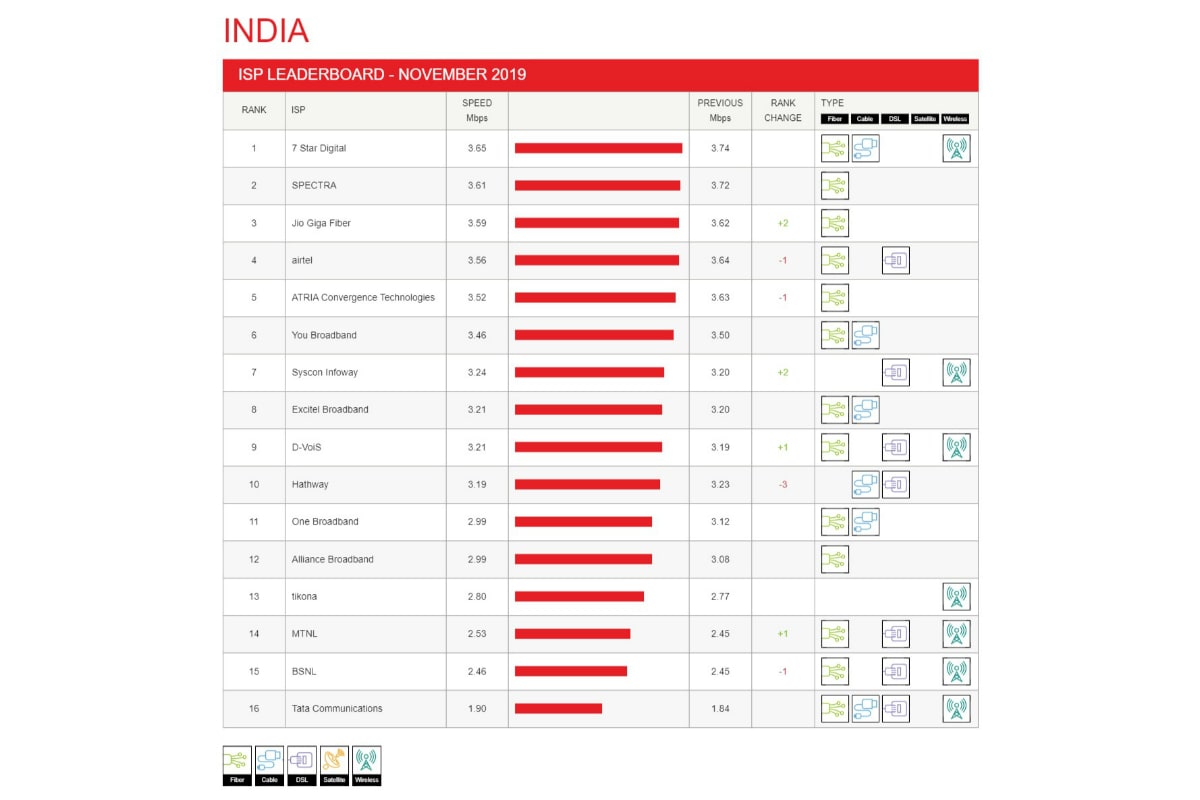 Both 7 Star Digital and Spectra had a slight drop in their average speeds when comparing with 3.74Mbps and 3.72Mbps, respectively, reported earlier.

Atria Convergence Technologies (ACT), which gives a tough competition to Airtel and Jio Fiber with its fibre optic broadband service, has also received a one-rank drop in the ISP Leaderboard provided by Netflix with an average speed of 3.52Mbps. This is down from 3.63Mbps reported earlier.

The company highlights that the Netflix Speed Index is not based on the overall performance of the listed ISPs for other services and data. This translates to the fact that you may notice some changes in the actual performance of the ISPs over what has been reported by the video streaming company.

Jio Fiber Showed Most Fluctuation in Internet Speeds in Q2 and Q3: Ookla