Idea Cellular has revised some of the Nirvana Postpaid plans

Idea Cellular has introduced a new recharge plan in its Nirvana postpaid lineup and revamped some of its other offerings. In yet another move to combat the Reliance Jio onslaught, Idea has rolled out new postpaid plans to offer additional data benefits to its subscribers. While the telco has refreshed its Nirvana plans worth Rs. 499, Rs. 999, and Rs. 1,299, it has launched a Rs. 399 plan to offer up to 125GB of data. Notably, all tariff plans in the Nirvana postpaid range offer unlimited local and STD calls, apart from free incoming calls on roaming to match Jio's prices and bundled data. Interestingly, the previous Nirvana plans worth Rs. 389, Rs. 649, Rs. 1,699, Rs. 1,999, and Rs. 2,999 seem to have been removed from the lineup, which was refreshed earlier this year, and there is no information on whether they will be relaunched in the future.

Meanwhile, the Idea Nirvana 499 Plan now offers 75GB of data. Earlier, the Rs. 499 plan offered 40GB of data. The data rollover limit of up to 200GB is also applicable in this plan. Additionally, subscribers get unlimited calling benefits and 100 SMS messages per day limits. 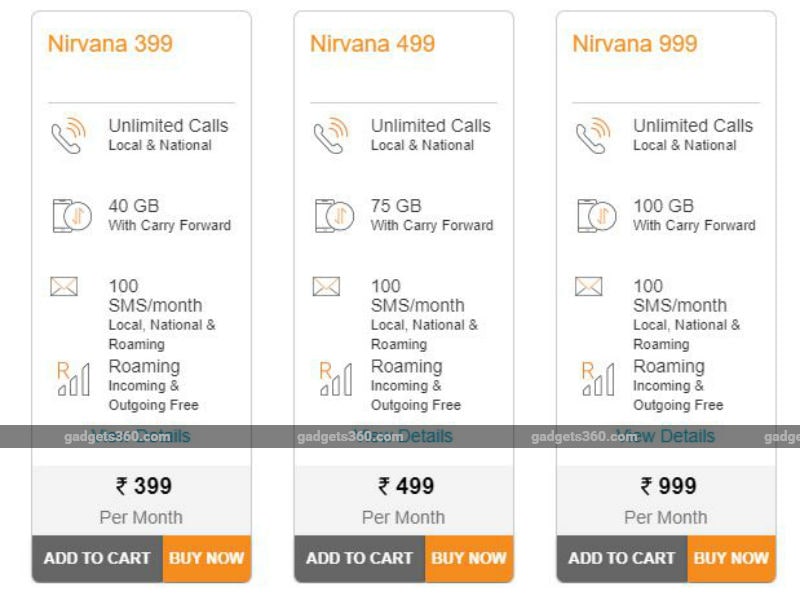 In the Idea Nirvana 999 Plan, subscribers can avail up to 100GB data. Earlier the Rs. 999 recharge pack was offering 80GB of data. Similar to the plans mentioned above, the data rollover up to 200GB are applicable here as well. Users also get unlimited calling benefits and 100 daily SMS messages.

Finally, the Idea Nirvana postpaid plan worth Rs. 1,299 will now offer 125GB of data. Earlier, the plan came with 100GB data. The data rollover limit of up to 200GB is also applicable in this plan and subscribers get unlimited calling benefits and 100 SMS messages per day limits. Notably, only the Rs. 1,299 plan provides a user with free 100 minutes of international calling to countries like the USA, Canada, China, Hong Kong, Singapore, Malaysia, and Thailand on specific codes.

Apart from these benefits, all Nirvana plans give Idea postpaid users free access to 12 months of Idea Music and Idea Movies and TV. The plans offer between 4 to 12 months of a magazine subscription, and a 4-month subscription to Idea Phone Secure. These plans also offer Idea Select membership that gives subscribers priority access at Idea stores and call centres, exclusive deals and promotions via the My Idea app, and free subscription on plan rentals above Rs. 499. The plan revision was first reported by TelecomTalk.