Airtel is offering the additional data benefits with its Rs. 399 plan to new and migrant subscribers.

Airtel has now started offering 20GB of additional data for a year with its Rs. 399 postpaid plan. With the latest development, the Rs. 399 Airtel plan is taking on the Rs. 399 postpaid plan by Vodafone that offers 40GB of data per month, as well as countering Reliance Jio. Airtel and Vodafone both notably provide unlimited local, STD, and roaming calls. Vodafone is also giving access to a one-year Amazon Prime subscription, whereas Airtel is only giving its subscribers access to the Wynk Music service. Unlike Rs. 399 plan by Airtel, Reliance Jio has a Rs. 199 postpaid plan that includes 25GB of data benefits alongside unlimited voice calls and 100 SMS messages a day.

The Rs. 399 postpaid plan by Airtel brings additional 20GB data for a year. This comes in addition to the existing 20GB 3G/ 4G data per month benefits that come with rollover support up to 200GB. In addition to the additional data, the plan offers unlimited local, STD, and roaming calls as well as 100 SMS messages per day for the entire billing cycle. Subscribers can avail the plan by visiting the official Airtel website or through the My Airtel app. 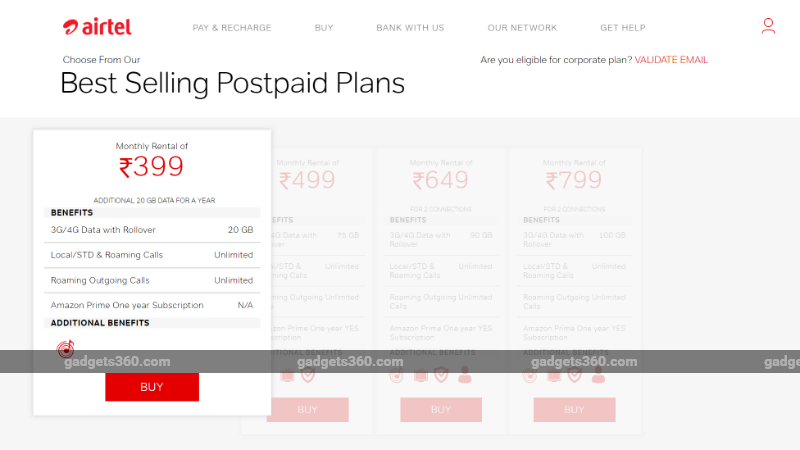 As we mentioned, the additional data benefits have brought the Rs. 399 Airtel plan in line with the Rs. 399 plan by Vodafone as the latter already offers 40GB data. Both operators also provide unlimited voice calls and 100 SMS messages per day to make the competition tougher.

Further reading: Airtel
Jagmeet Singh Email Jagmeet
Jagmeet Singh writes about consumer technology for Gadgets 360, out of New Delhi. Jagmeet is a senior reporter for Gadgets 360, and has frequently written about apps, computer security, Internet services, and telecom developments. Jagmeet is available on Twitter at @JagmeetS13 or Email at jagmeets@ndtv.com. Please send in your leads and tips. More
Fortnite's New Galaxy Skin Might Be a Samsung Galaxy-Exclusive
How Android Pie Could Change the Way You Use Your Phone