Airtel has started offering as much as 20 percent discount for broadband subscribers buying its monthly plans for a year, while subscribers selecting monthly plans for six months are offered a 15 percent discount. The latest development is live across all the circles where the operator offers its broadband service. The discounts are apparently aimed at retaining the existing subscriber base and attract new subscribers ahead of the public launch of Reliance Jio's Jio Fiber fixed-line broadband services that are reported to offer 100Mbps of broadband connectivity in addition to unlimited voice calls and Jio TV access at a monthly charge of less than Rs. 1,000. Airtel broadband services notably deliver up to 300Mbps Internet speeds and select plans include Amazon Prime subscription to make things difficult for Jio Fiber services.

With the new change, the 300Mbps plan that comes at a monthly charge of Rs. 2,199 and includes 1200GB of FUP limit as well as unlimited voice calls and Amazon Prime subscription can be availed for as low as Rs. 1,758 a month when opted for a year. The same plan can also be availed for six months at a monthly charge of Rs. 1,866. Identical discount percentages are available with Rs. 899, Rs. 1,099, and Rs. 1,299 monthly plans in the Delhi circle. You can visit the official Airtel site to choose your option. 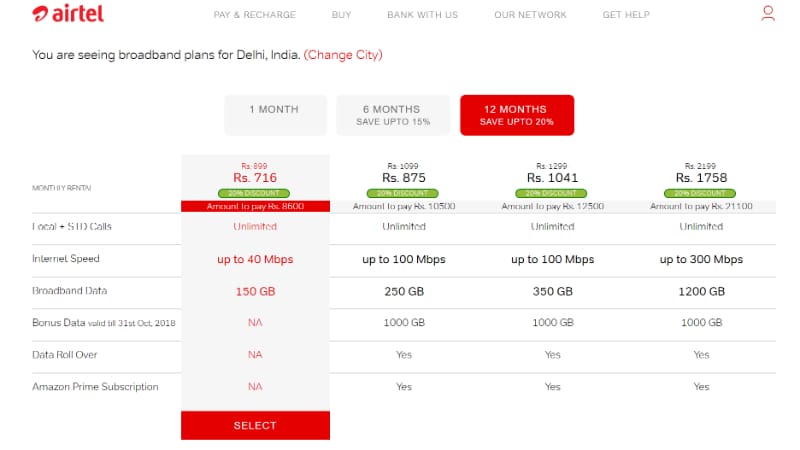 While Airtel broadband plans vary from circle to circle, the discount percentages are the same across all the circles. This means subscribers will receive 15 percent discount on picking any of the monthly plans for six months and 20 percent discount on selecting the same plans for a year, irrespective of the plan charges.

Earlier this month, Airtel announced that it will boost broadband penetration in rural India by piloting Broadband Experience Centres powered by the government's BharatNet infrastructure. These Centres are initially established in rural areas in Uttar Pradesh in partnership with up to 30,500 gram panchayats. Moreover, the operator is claiming to offer up to 100Mbps of Internet speeds to these Centres.

Further reading: Airtel
Jagmeet Singh Email Jagmeet Jagmeet Singh writes about consumer technology for Gadgets 360, out of New Delhi. Jagmeet is a senior reporter for Gadgets 360, and has frequently written about apps, computer security, Internet services, and telecom developments. Jagmeet is available on Twitter at @JagmeetS13 or Email at jagmeets@ndtv.com. Please send in your leads and tips. More
As Facebook Ages, Teens Look Elsewhere to Connect
Apple Refutes iPhone Passcode Bypass Claims by Hacker, Claims It's a Result of 'Incorrect Testing'