Airtel has introduced a new recharge priced at Rs. 97 in its lineup of combo recharge packs to take on Jio. The telco had launched three combo recharge packs, priced at Rs. 35, Rs. 65, and Rs. 95 earlier this month. These Airtel recharges offer data benefits, voice calls, and longer validity at the same time to match Jio prices and bundled data. Notably, the new Airtel Rs. 97 recharge plan is available across India. Interestingly, Airtel's Rs. 97 will clash with its own prepaid plan worth Rs. 99. Meanwhile, Jio's Rs. 98 recharge for smartphones offers similar benefits but with unlimited voice calls, while the Jio Phone recharge priced at Rs. 99 gives much more data.

Coming to the benefits of the Airtel Rs. 97 prepaid combo recharge pack, this new plan offers 350 minutes of local, STD, and roaming voice calls. Besides the voice calling benefits, subscribers will also get 1.5GB of 3G/ 4G data and 200 local and STD SMS messages. Notably, the validity period of the plan is 28 days. Subscribers can avail the plan by visiting the official Airtel website or through the My Airtel app. When Airtel had released three combo recharge packs earlier this month, it rolled out to subscribers in Punjab, Tamil Nadu, and UP (West). The telco has said that the plans will be rolled out in other parts of India over the next few weeks, which is interesting because Airtel had launched a plan worth Rs. 95 as well. 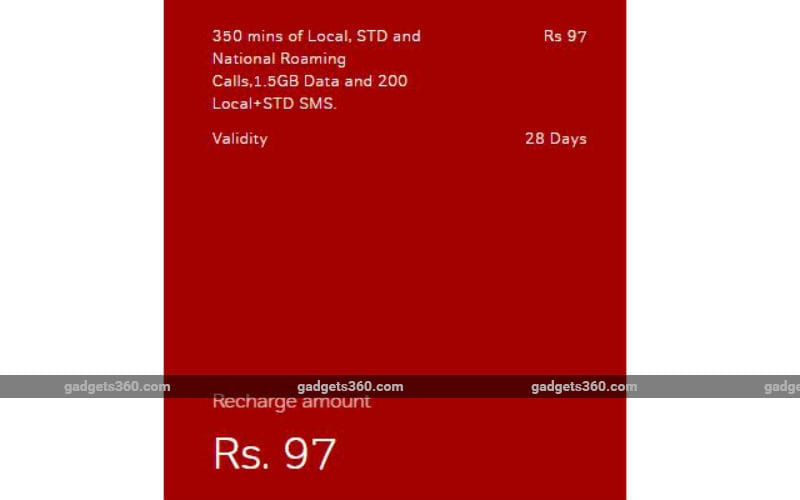 Under the Rs. 95 combo recharge, Airtel is offering 500MB of 3G/ 4G data alongside a talk time of Rs. 95. While in the earlier plans calls were charged at 1p/ sec, the new plan charges 1p/ 2 secs. The validity period of this plan is 28 days as well. Additionally, Airtel has a prepaid plan worth Rs. 99 that was revamped in June this year. Under the Rs. 99 plan, the telco offers unlimited local, STD, and roaming voice call benefits as well as 100 SMS messages per day for the 28-days validity period, alongside an upgraded 2GB data limit.

The Rs. 98 pack by Jio, on the other hand, offers 2GB data, unlimited voice calls, 300 SMS messages limit, and complimentary access to Jio's entire suite of apps for a standard bill cycle. The validity period of this plan is 28 days as well. As for the Rs. 99 Jio Phone recharge, buyers will get 500MB of 4G data per day, meaning a total of 14GB data. On top of this, they will get unlimited calls, 300 SMS messages, and access to the company's apps. Validity of this recharge is 28 days as well.