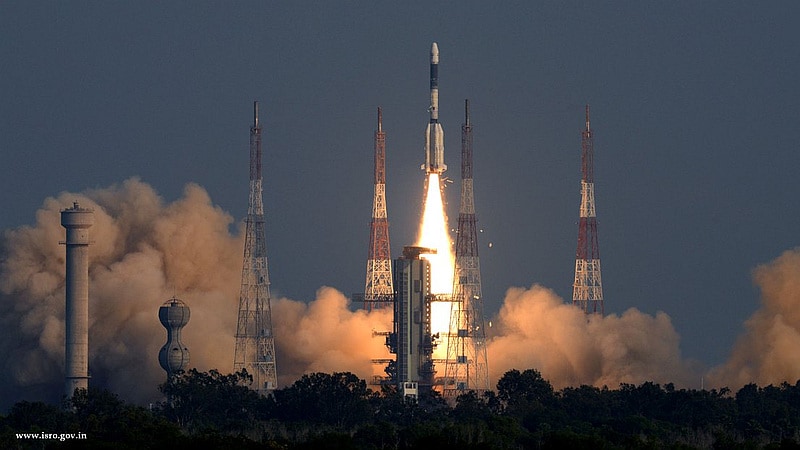 After a 26-hour countdown, the GSLV-F11, carrying the 2,250kg GSAT-7A, lifted off at 4:10pm IST from the second launch pad at Sriharikota, situated about 110km from Chennai. Around 19 minutes after lift-off, the GSLV-F11 injected GSAT-7A into the intended orbit. It will be placed in its final geostationary orbit using the onboard propulsion systems.

From the Mission Control Centre, ISRO Chairman K Sivan said Wednesday's "successful and safe" launch was the third one in 35 days and came close on the heels of the "grand success" of two missions in November. The GSLV-F11 successfully injected the "advanced" communication GSAT-7A into orbit, an elated Sivan said, describing the mission as "wonderful."

This was the heaviest satellite lifted by the GSLV with indigenous cryogenic stage, he said. It came with many firsts, including increased propellant loading and other features, the ISRO chief said. The "cryogenic stage is burnt to depletion to get a super synchronous transfer orbit to enhance the life of the satellite," he said.

The mission life of the GSAT-7A, built by ISRO, is eight years. It will provide communication in Ku-band over the Indian region. The advanced communication satellite also came with new technology regarding the antenna to improve the performance, Sivan said. Its solar panels have been deployed and orbit raising manoeuvres will be done from Thursday morning from Bengaluru, he said.

Wednesday's mission also gave the scientists some anxiety "as the weather god was not very conducive some one week back," Sivan noted. However, the meteorological team here gave correctpredictions, he said and congratulated the ISRO team members behind the successful launch, the last of this calendar year.

"This is the last mission of this year. We are going to initiate the new year with a grand mission soon," he said. Sivan said the new year would see ISRO taking up challenging launches, including the Chandrayaan-2 moon mission.

The GSLV-F11 is the ISRO's fourth generation launch vehicle with three stages. Four liquid strap-ons and a solid rocket motor at the core form the first stage of the launch vehicle, while thesecond stage is equipped with a high-thrust engine using liquid fuel, ISRO said. The Cryogenic Upper Stage forms the third and final stage of the vehicle.

The seventh launch of 2018 from Sriharikota marks the69th mission of GSLV-F11 for ISRO. On November 14, ISRO's GSLV-MkIII-D, which is dubbed by the ISRO as the 'Bahubali' or "fat boy" of Indian rockets, injected into orbit a 3,423 kg communication satellite GSAT-29, the country's heaviest to be put into orbit. India's earth observation satellite HysIS and 30 other co-passenger satellites from eight countries were launched onboard ISRO's trusted workhorse Polar Satellite Launch Vehicle on November 29.