Idea Cellular has sent out media invites for a Monday, January 30 event where it will launch its ‘Digital Idea’ apps suite to take on Reliance Jio’s range of apps that come preloaded with Lyf phones. In the invite, Idea also says that the launch of the Digital Idea apps is part of its transition to becoming a pan-India mobile broadband operator and full service digital solutions company.

With the ‘Digital Idea’ suite, Idea will launch movies, TV, music, and gaming apps, among others, it said. These apps are aimed at the “on-the-move online generation,” Idea said; Reliance Jio apps already has apps focused on music, movies, and TV. A host of preloaded media streaming and gaming apps entail higher data consumption by the user, meaning more revenue from mobile data services.

In its quarterly report released in September 2016, Idea had announced plans to launch these content apps, which were called Idea Games, Idea Videos, and Idea Music. Idea Chat is another app that the operator planned to launch alongside the content apps in the January-March quarter.

The Reliance Jio apps that Idea’s new apps will compete with include JioCinema, JioTV, and JioMusic. The Mukesh Ambani-backed telecom operator does not have a gaming app in the market yet. Other similar Jio apps available to download are JioMags, JioXpressNews, and JioNewspaper.

At present, Idea Cellular offers music and movies to its consumers as discounted subscriptions for Hungama Digital and EROS content. However, it does not have any original content yet. Airtel already has its Wynk Music and Wynk Movies apps in the market, while Vodafone has the Vodafone Play app in the same space. 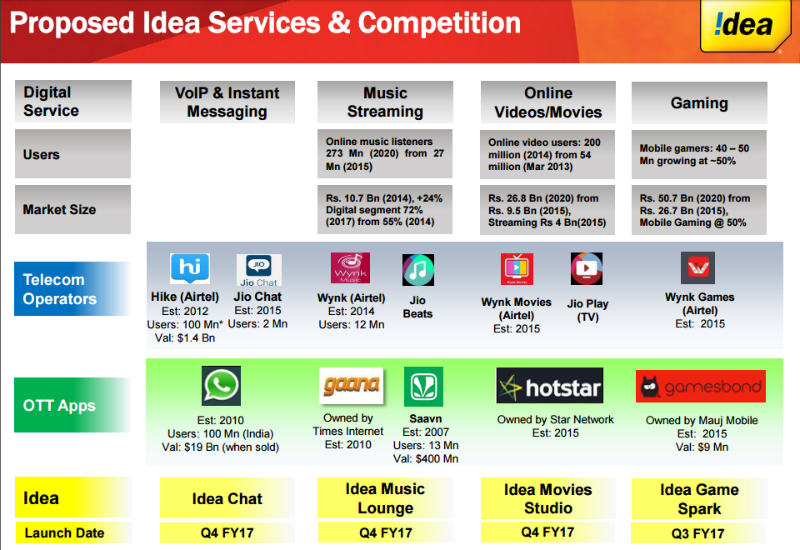 In the next fiscal year, Idea will launch more apps, namely Idea TV, Idea News & Magazines, and Idea Storage, making it better positioned to take on Reliance Jio's suite of apps. It will also launch the Aditya Birla Idea Payment Bank, in which Idea Cellular has a 49 percent stake, in FY17-18, the report said.

Apart from the launch of Digital Idea apps, the move to becoming a mobile broadband operator is also a significant shift for Idea. However, this had also been foreshadowed by the company in its September 2016 report, which came out just before Reliance Jio launched its services. While the mobile voice segment has high competition (6-9 operators), the competition is less in the mobile broadband segment (2-3 serious operators), the report said.

Idea’s report said that while 322 million people in India use Internet services (as per TRAI Performance Indicator March 2016), 800 million are yet to go online. It said that millennials and generation Z will lead this growth, and rural Internet user base will grow at a faster clip. The company will enter the following businesses in 2017 – bill payments, music and video streaming, online gaming, cloud storage, banking, and instant messaging. 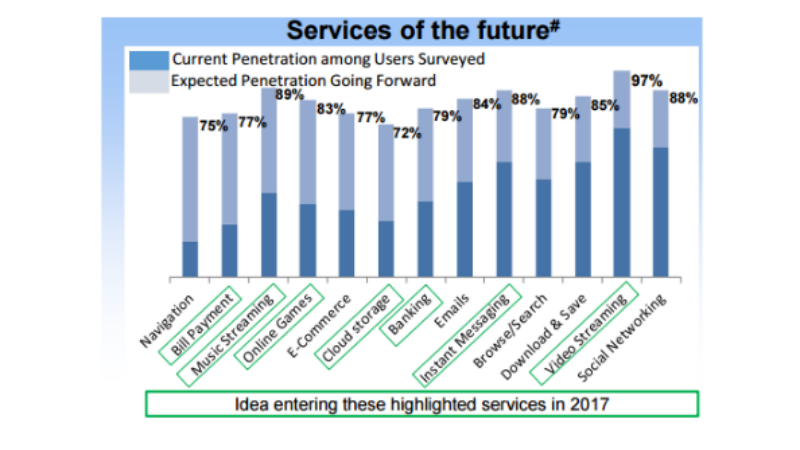 Other opportunity areas cited in the report include navigation, e-commerce, emails, Internet search/ Web browsing, social networking, and download & save [content]. However, there is no word yet on whether the company plans to foray into these fields this fiscal year.