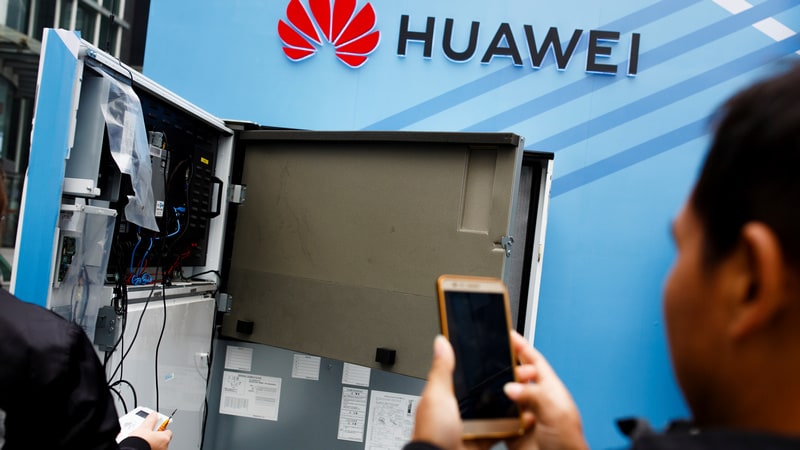 The US dispute with China over a ban on tech giant Huawei is spilling over to Europe, the company's biggest foreign market, where some countries are also starting to shun its network systems over data security concerns.

Some European governments and telecom companies are following the US's lead in questioning whether using Huawei for vital infrastructure for mobile networks could leave them exposed to snooping by the Chinese government.

Bans in Europe could significantly increase the financial pressures on Huawei. They would also cost Europe tens of billions of dollars as the region looks to build up "5G" networks, which are meant to support a vast expansion in Internet-connected things, from self-driving cars to factory robots and remote surgery.

"Europe is still divided over Huawei, but the trendline is moving in a fairly clear direction" as the US exerts pressure on allies to block it, said Thorsten Benner, director of the Berlin-based Global Public Policy Institute think tank.

Geopolitical tensions over Huawei intensified after its chief financial officer, who is also the daughter of founder Ren Zhengfei, was arrested December 1 in Canada in connection with US accusations that the company violated restrictions on sales of American technology to Iran.

Huawei has been blocked in the US since 2012, when a House Intelligence Committee report found it was a security risk and recommended that the government and private companies stop buying its network equipment.

Germany's Deutsche Telekom said last week it "takes the global discussion about the security of network elements from Chinese manufacturers very seriously." The company said it uses multiple companies to build its network, including Ericsson, Nokia and Cisco.

"Nevertheless, we are currently reevaluating our procurement strategy," the company said.

The statement is significant because until recently it had been one of Huawei's "biggest cheerleaders" based on its cheap and reliable equipment, said Benner.

It came shortly after Alex Younger, the director of Britain's Secret Intelligence Service, or MI6, said in a speech that Britain needs "to decide the extent to which we are going to be comfortable with Chinese ownership of these technologies," according to local media reports.

At about the same time, mobile provider British Telecom said it was removing Huawei equipment from key parts of its current 3G and 4G networks as part of an internal policy not to use it for core infrastructure, which will also apply to 5G networks.

The British government-run center that tests the company's equipment and software this summer identified "shortcomings in Huawei's engineering processes that have exposed new risks" in UK networks. Huawei said it's working on fixing those issues.

Norway's telecom ministry said it was considering clarifying requirements from network operators, without being more specific.

Belgium's cyber-security agency is reportedly considering a ban on Huawei. And the Czech Republic's prime minister ordered his government office on Tuesday to stop using Huawei mobile phones, after the national cyber-security agency warned that products by Huawei and another Chinese telecom company, ZTE, pose "a security threat."

The European Union's head of technology policies, Andrus Ansip, said "we have to be worried" about possible security risks from Huawei when asked about the company's role in European 5G and driverless car projects.

Huawei, founded in 1987 by a former military engineer, denies accusations it's controlled by China's ruling Communist Party or designs equipment to facilitate eavesdropping. It said it recognises and shares security concerns around the rollout of new 5G networks and is happy to take part in Deutsche Telekom's review.

The company noted German officials have said publicly there's no reason to exclude Huawei and it has never been involved in any confirmed cyber-security breaches.

"Cyber-security is incredibly important to Huawei. It is central to every decision and product we make," said Vincent Pang, the company's president for Western Europe. "We think the answer lies in global cooperation and collaboration to ensure that networks are as secure as possible."

The Europe, Middle East and Africa market is Huawei's second biggest after China, accounting for 27 percent of its nearly $90 billion revenue last year. Executives said the company has now signed contracts with 25 telecom carriers for commercial or test use of 5G and shipped more than 10,000 5G base stations.

The rollout of 5G networks is expected to take a decade. As technologies advance, the amount of data flowing between machines is set to surge, prompting governments to increasingly view telecom networks as strategic national assets.

Not everyone is endorsing quick action to ban Huawei.

The CEO of the French telecom company Orange, Stephane Richard, said last week his company wouldn't use Huawei gear for sensitive parts of its network because of "messages of prudence" from French authorities. But he said that was not for any technical reason, and that the debate on Huawei had become politicised.

"We're in the realm of fantasy: 'They're Chinese. They have links to the Chinese army, thus there are spies, thus we can't let them touch our telecom equipment'," he said.

"It's not like there's some cheaper alternative," said Paul Triolo, head of geotechnology practice at the Eurasia Group. "Ericsson and Nokia don't produce the whole spectrum" of equipment, referring to the Scandinavian companies that are the only non-Chinese competitors.

Huawei has thrived in major European markets like Germany and Britain because their telecom industries wanted to ensure there were multiple equipment suppliers to avoid relying on one.

"So if you're asking them to remove a major vendor from their markets, it's going to be difficult," Triolo said.

German companies won't be happy if they can't use Huawei because their costs will go up and it will delay rolling out 5G networks, which will initially rely on existing 4G infrastructure for which Huawei is already a major supplier, said Benner.

But German decisions are also likely to influence those by smaller countries that are part of the German industrial manufacturing supply chain, such as Poland, Hungary, the Czech Republic and Slovakia.

"They'll all wake up if Germany takes a decision and worries about the security of its infrastructure," said Benner.