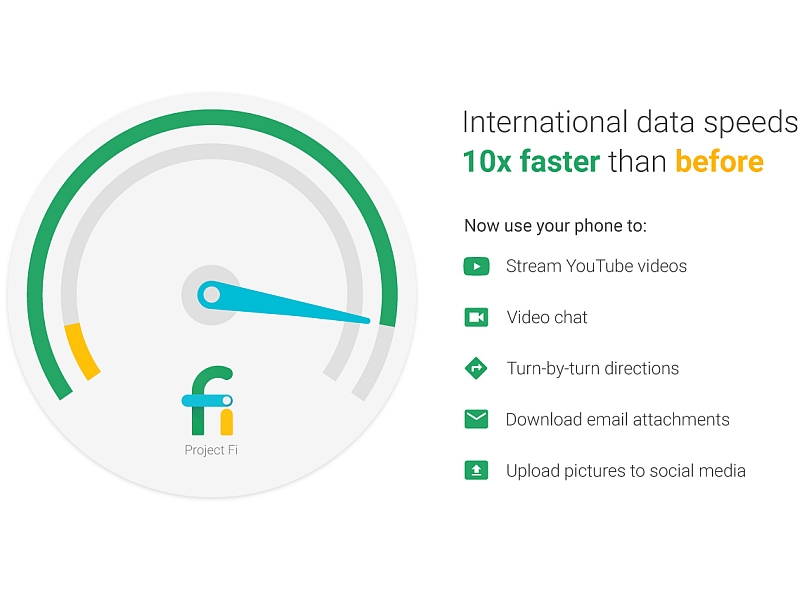 Google has just roped in another carrier into its Project Fi initiative, broadening its horizons. With the partnership with cellular giant Three, Google Project Fi subscribers can avail of high speed data in over 135 countries.

The Internet giant claims that Project Fi now works in 97 percent of areas where US residents look to travel. Apart from widening its reach, the Google-Three partnership has also brought faster speeds into the mix. Google claims that the Project Fi network now can deliver up to 10 to 20 times faster international data speeds than before. Google in its blog post says this will help Project Fi subscribers who are travelling to other countries to stream videos, video chat, use turn-by-turn navigation, download attachments, and upload content to social media.

Google unveiled Project Fi mobile telephone network in April last year in a bid to curb use of expensive roaming data and keep phone bills low. After ten months of testing, it opened the service up for all users in March this year, and launched in partnerships with Sprint and T-Mobile. For now, this service works only on the Nexus 6P, Nexus 6 and Nexus 5X smartphones; and the company has launched an adjacent offer to push Project Fi further. Google is offering the Nexus 6P smartphone at a $150 discount for a week, but only to those who pledge to activate Project Fi alongside.

Project Fi-enabled smartphones link to any of the three 4G LTE networks or to Wi-Fi, automatically adjusting to optimal connections and switching from one to another without interrupting service.Data service costs $10/GB, and the unlimited domestic voice calls as well as unlimited domestic and international text messaging plan costs $20 per month. This initiative is only available for US travellers, and the Project Fi has not been launched outside of the country yet. Voice call rates (whether over Wi-Fi or cellular networks) depend on the country the Project Fi subscriber is travelling to, or is attempting to contact

PC Shipments See Some Respite in the US as Global Downtrend Continues
Tesla Has No Plans to Disable Autopilot Feature, Says Elon Musk