All eyes on Vodafone's Vittorio Colao for signs on Verizon 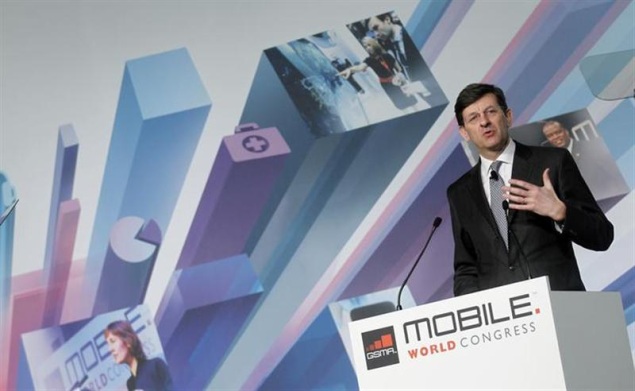 After months of speculation, Vodafone's Vittorio Colao will be under pressure next week to set out whether he may sell its prized stake in Verizon Wireless in what would be one of the biggest deals ever.

Chief executive for five years, Colao has said only that he has an "open mind" on Vodafone's 45-percent stake in the U.S. operator, whose majority owner, Verizon Communications , is interested in buying out the British company's share.

With a possible asking price around $120 billion, the topic may well dominate Vodafone's annual results presentation on Tuesday, highlighting the pressures on profits elsewhere in the company and the dilemma faced by its Italian CEO.

A source familiar with the situation surrounding a possible bid for the stake by Verizon Communications said: "All their eyes are on May 21 Vodafone earnings, and what Vodafone will say about Verizon Wireless,"

Analysts are expecting Vodafone to post organic service revenue in the fourth quarter down 4.3 percent, the worst fall in its main sales measurement since the company started using that metric in 2003.

Analysts are also expecting the group to forecast a fall in free cash flow for the next financial year, to March 2014, due to increasing investment needs and the continuing torrid conditions in some of Vodafone's biggest European markets.

But the sharp fall in fourth quarter group organic service revenue, after a fall of 2.6 percent in the third quarter, is seen as the likely low point for the firm, due to a peak in regulatory cuts and the timing of a leap year last year.

"This free cash flow guidance is lower than prior guidance reflecting rising investment needs and greater macro pressures; however, this is already anticipated by consensus," Goldman Sachs said in a note to clients.

Vodafone has been hit hard by recession in southern European markets like Spain and Italy, where customers are cutting back on using phones, resulting in double-digit quarterly declines.

In the past year, its British and German markets have also turned negative due to competition and even the operations in emerging markets such as India have posted slowing growth.

The pressures on the business, compounded by regulatory cuts to how mobile operators charge each other for connecting calls, have helped complicate Vodafone's calculations on whether finally to sell out of Verizon Wireless.

The largest mobile operator in the United States, is growing at a rapid rate and throwing off cash to its two parents. But Vodafone dislikes not having control of assets and Verizon has stepped up the pressure in recent months for it to sell.

Two people familiar with the situation have told Reuters that Verizon is preparing a possible $100-billion bid to take control of the unit, although that is seen by analysts and investors as merely a starting point in the negotiations.

The consensus among Vodafone analysts is that the stake would need to be sold for around $120 billion or more to compensate for the loss of earnings.

Overall, Vodafone is expected to post full-year revenue down 4.4 percent to 44 billion pounds according to the consensus. Group core earnings are forecast to be down 9 percent at 13.2 billion pounds.

The group will also have to set out what it will do with its dividend and what it plans to do with the $3.15-billion payout it will receive from Verizon Wireless in June, after the company announced the dividend last week.