In a bid to boost its landline business, country's largest telecom operator Bharti Airtel will be launching unlimited voice calling schemes for its broadband customers.

The company has about 1.49 million broadband customers at the end of December last year.

"In an industry first, it will announce that its broadband customers can enjoy free voice calls to any network in the country 24x7," the company said.

A fair usage policy (FUP) is applicable on the unlimited free calling schemes, with the company specifying a limit of 5,000 minutes of free calls. Airtel also adds consumers availing of the schemes will require active broadband plans, and that the schemes aren't available for commercial use. 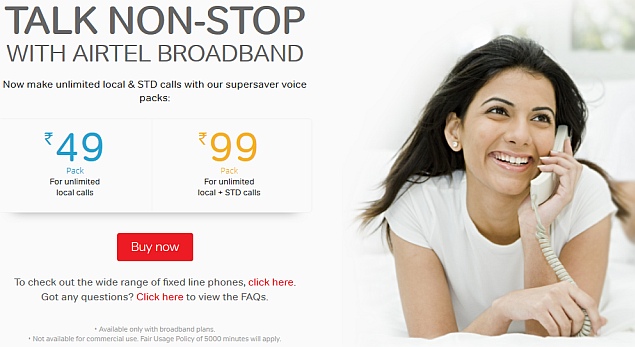 Airtel currently provides fixed-line telephone and broadband services for homes as well as offices in 87 cities across the country.

According to the latest Trai data, BSNL, which dominates the landline space, was the biggest loser of fixed-line customers in February whereas Airtel emerged as the top gainer.

BSNL had over 16.6 million landlines at the end of February whereas Airtel had 3.39 million.