The Airtel Payments Bank - the first payments bank - has officially launched nationally on Thursday, at an event in New Delhi where Finance Minister Arun Jaitley, formally launched the bank. Airtel had earlier (in November) launched a pilot payments bank program in Rajasthan, across 10,000 Airtel retail outlets in the state.

Now, the Airtel Payments Bank is officially live across all 29 states, and according to Airtel, there are over 250,000 Airtel retail stores that that will function as banking points around the country. You will be able to make deposits, and withdrawals at these stores. 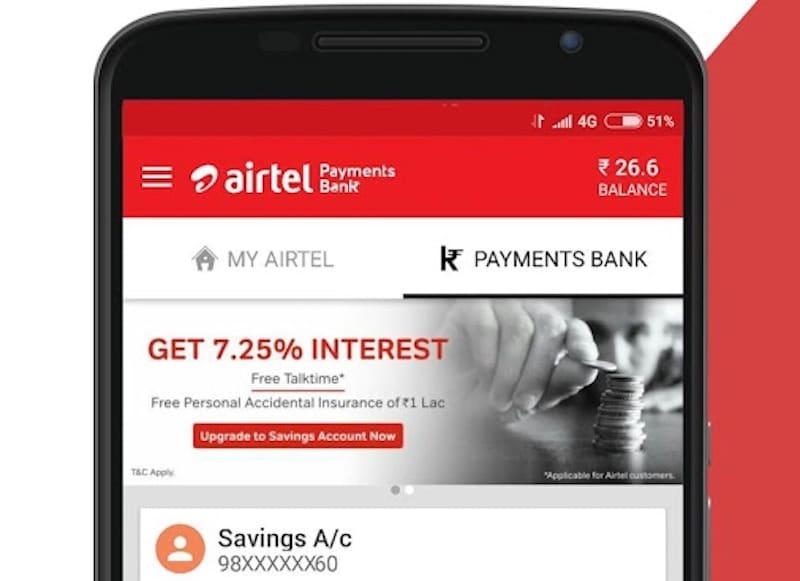 This will follow the same pattern already laid out with the initial launch in Rajasthan - Airtel Payments Bank will support account opening with Aadhaar based e-KYC. The customers' mobile numbers are their bank account numbers, and you will get one minute of talk-time for every rupee deposited at the time of opening the account, capped at 500 minutes.

Airtel will also offer 7.25 percent interest on the deposits in the payments bank accounts, and this money can be transferred to any bank in India. Airtel will also not charge any fees for Airtel to Airtel money transfers - if done digitally. You will have to pay 0.5 percent even if you transfer money from your Airtel Bank account to another Airtel account, if you do this at the retail store.It will also not charge any processing fee for digital transactions via Airtel Payments Bank, and will offer a MasterCard-powered virtual debit card that can be used online. However, Airtel is not offering any ATM card or physical debit card - if you want to withdraw cash, you will need to go to an Airtel retail store.

The whole banking process at Airtel Payments Bank can be carried out digitally through an app (on both iOS and Android), but you can also use USSD and IVR to transact, if you don't have a smartphone.

At the Airtel Payments Bank launch, the company also said that it will be helping to develop a nation-wide merchant ecosystem including small stores, grocers, pharmacies and so on, to help more people to accept payments through mobile phones. To this end, Airtel has also launched a Merchant App for digital Onboarding. It will also not be charging any fees from merchants for now, so merchants don't need to pay anything to accept money via the Airtel Payments Bank, and they can self-declare as merchants, to speed up the process.

Airtel revealed that during the payments bank pilot phase in Rajasthan, it was able to onboard over one million customers. It added that it has also begun to onboard merchants, with a million added, and a target of five million merchants across India.

NOTE: The text has been updated to add details about various charges.