Airtel has launched a new prepaid plan offering 4GB data per day that takes on similar data-heavy plans by the likes of Reliance Jio and BSNL. The new plan has validity of 28 days, with a total of 112GB of 3G/ 4G data on offer, at a price of Rs. 999. This Airtel Rs. 999 plan is only seems to be available for prepaid consumers for now and can be purchased via the MyAirtel app or the Airtel.in website under recharges. Earlier on Monday, the telecom operator also launched a Bonus 30GB offer that provides new postpaid customers with 30GB of complimentary data.

Seemingly aimed at users with high data consumption, the Airtel Rs. 999 prepaid plan comes with “unlimited” local and STD calls. However, under the Terms & Conditions section, the company elaborates that the bundled calls are capped at 250 minutes per day and 1,000 minutes a week for both local and STD calls. Calls made beyond this limit will be charged at 10p per minute for Airtel-to-Airtel calls, and 30p per minute for calls to other networks. 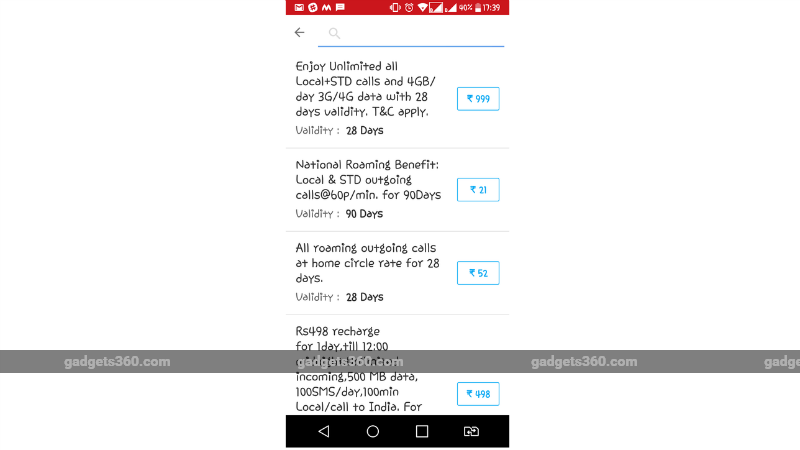 The Airtel Rs. 999 plan has bundled calls, with daily and weekly caps

Users who purchase the Airtel Rs. 999 plan via Airtel Payments Bank will get 50 percent cashback as part of an ongoing offer.

Reliance Jio has a similar data-heavy Rs. 999 pack for prepaid users, which comes with 90GB data. Though the data is lesser compared to Airtel’s plan, there is no daily cap on data consumption. On the other hand, the validity of the pack is 90 days, so on an average, the user gets 1GB data per day. The Rs. 509 Jio plan comes with 112GB data, but offers only 2GB data per day and validity of 56 days.

BSNL also has a plan with 4GB data per day limit, priced at Rs. 444. The plan has a validity of 90 days, meaning a generous 360GB of data on offer. However, unlike Airtel and Jio, BSNL does not have a 4G network yet, so the data will be capped at 3G speeds only.