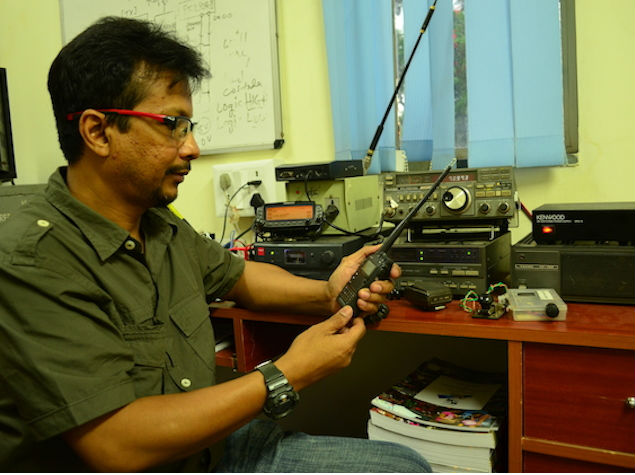 In an office in Qutub Institutional Area, Sandeep Baruah, Scientist-E with the Vigyan Prasar, a part of the Department of Science and Technology, sits down to listen for ham radio operators in a 7,000 mile radius around Delhi. His cabin, a small, cramped place, located in a corner of a second floor office is littered with books and radio equipment, an unfinished directional antenna, and a laptop connected to another receiver.

As his system goes live, little coloured dots on the screen begin appearing all over Europe, Indonesia, Malaysia and Thailand. A few in India and South Africa complete the picture.

"I have not extended the range till America, else we could see operators there too," Baruah says with a grin.

Once he has finished looking at the operators he moves to a side table which is cramped with transmitters and receivers. The equipment starts wheezing and hissing to life as he flicks a switch to activate it. Baruah tunes the frequency locator till a faint sound of women singing is audible amidst the static.

"It is one of the Vigyan Prasar programmes that is broadcasted in the mountains," he explains. "It is a troupe of singers from there who are singing folk songs for the local population."

Welcome to the world of ham radio
Ham radio - once a derogatory, then later affectionate nickname for amateur radio - got its start at the beginning of the 20th century, when amateur radio lovers began tinkering with equipment to talk to each other. In many ways, it's the first social network - anyone with the right equipment can join, get a call sign, and start chatting. Kind of like an Internet chatroom, but without everyone asking "A/S/L?" all the time.

While the technology is now mostly obsolete in the world of Internet connections and smartphones, there are still times when modern ham-operators can serve as essential communication channels, since ham-radios can be used without any major infrastructure.

For example, when the earthquake in Latur happened in 1994, ham-radio enthusiast K A Avari was one of the people who went to the disaster site.

"With all communications knocked out we went down to Latur ourselves with our equipment to help the local governments," says Avari. "I was in the Mantralaya then, where we set up a 24x7 operations room to get communications up with the help of the Chief Secretary."

Disaster management is just one use though, and for the majority of ham-operators this is still a hobby that they indulge in while tinkering with radio equipment, to chat with fellow hobbyists around the world - or even in space.

A retired engineer, Avari began to play around with ham radios in the 80s in Mumbai, and he tells us that on clear days one can chat with astronauts aboard the International Space Station, though it's only possible at very specific times. "The communication can happen only when the station is directly overhead or the satellite carrying the astronaut is directly overhead," he says.

Avari says that his hobby was born out of a genuine love of tinkering with electronics and radio communications.

"Of course purchasing these radios was out of the question, given that they were expensive," he says. "So we would make our own radios, solder the wires and connect them to antennas for our own private broadcasts. We would go down to the dockyards and purchase old radio equipment from ships that were being stripped down." They would then work with these second hand radios, receivers and transmitters to make their own ham radios. "People with money would import the radios. The government even gave a 25 percent subsidy then to people who bought the radios in from abroad," he says, remembering the heydays of ham radio in India.

The radio equipment is still expensive. A setup like the one at Baruah's office can cost close to Rs. 1.5 lakhs. Some of the major players in the market include Icom, Kenwood and Yaesu. The hobbyist on a budget can instead try their luck in markets like Chor Bazaar to try and get old equipment which doesn't necessarily work anymore, but can be fixed with a little effort, though Avari says that these days, few people want to build a radio, and would rather just buy working equipment.

"We started a club where people donated radio equipment, which we then rebuilt so that other enthusiastic hams could come and operate without the actual need to purchase it," says Avari, who goes by the call sign VU3KJA. 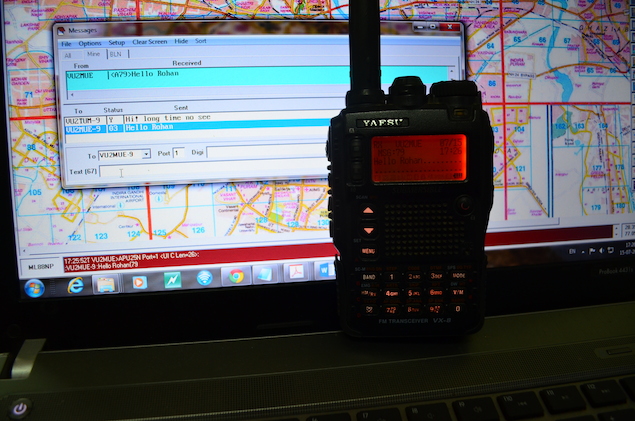 VU are in India
The call sign - the name you go by on the ham radio - has to start with the letters VU for ham radio operators operators in India. Each country has a different identifier, which can be used to mark your country, and whether you're using the ham radio for personal use, for military use, or for aircrafts.

Sandesh Kamat (call sign VU2SXF) is the Chairman of the Mumbai Amateur Radio Society, and he has been working on popularising ham radio as a hobby in India. It's an uphill task though, he says, as interest ebbs.

"The important thing to understand about ham radio is the fact that it is a hobby born out of genuine interest and love for radio and electronics," Kamat says. "Yes demonstrations can be given but then again the percentage of people who take it up from there is very less."

But a lack of interest is only part of the problem keeping people from taking up ham radio as a hobby.

To use a ham radio, you require a licence, which is only issued after an exam. These are only conducted when there are enough students, "so assuming you pay the fees for the exam today, your date will come around 2-3 months later and the actual license almost a year later," Baruah says.

Vigyan Prasar oversees the licensing, but Baruah (call sign VU2MUE) admits that even after passing exams, a lot of students don't get their licences. This happens because of laws as old as the British Raj, says Baruah, adding that the Telecommunication Ministry, the Law Ministry and the Home Ministry are all involved in the entire process. As a result, a licence can be delayed, or even denied for any number of reasons.

"I come from Guwahati, and so many of my friends [from the region] who have passed the exam are waiting for their licenses for the last 20 years," says Baruah. "What it does is, it reduces the interest in the hobby, and since a person cannot use the equipment without a license the entire effort taken to give the exam, even build the radio dies out."

On the other hand, he points out that in a country like Thailand, you can get the licence when you purchase a radio, without any of the rigamarole that takes place in India. Baruah had earlier submitted a document to the Ministry of Telecommunications to identify and remove the bottlenecks and speed up the licensing process but not surprisingly, these were not implemented.

Chewing the rag
Karthikeyan Sivakumar is a part of the Bangalore Amateur Radio Society which organises meetups and games to promote the use of ham radios.

"A person goes off into the interiors of the city and broadcasts a signal, which eventually has to be found out by other hams," says Sivakumar. "International Ham organisations even have ham radio competitions across the globe, which last for 36 and 72 hours, where you have to establish contact with as many hams as possible across the globe."

Avari says that on a clear day one can speak to someone in Dubai, from sitting in their balcony Mumbai. "Then there is the business of rag chewing," he says.

Chewing the rag just means chatting, and it's probably the top pastime once you have your set up and running. "Hams listening across different frequencies engage in chitchatting," says Avari. "Topics that are not discussed include the likes of religion, politics and anything that can be termed as inflammatory."

For others, ham radio is a connect to simpler, more cheerful times.

"I remember as a little boy when I first saw these radio sets, and saw people communicating from Guwahati to Malaysia and was fascinated how could someone talk so easily," Baruah says. "I still get the same feeling when I sit down to listen onto a frequency or speak to other Hams around the world."