Reliance Jio and Airtel are warring once again, this time over the information the popular app Speedtest displays when Internet speed test results are shared. With Ookla - the company behind the Speedtest app - declaring Airtel as the fastest mobile network in the country, Reliance Jio has countered by filing complaint against Airtel with the advertising watchdog and sending a legal notice to Ookla. To fully understand what's transpiring between the telecom operators, here's a little context.

At the start of this month, Ookla said that Bharti Airtel was the fastest mobile network in India, based on the data from Q3 and Q4 of 2016. Soon after, Indian regulator TRAI run MySpeed app showed that Reliance Jio had the fastest 4G download speeds in India for the month of February. That's where things should've ended, except for the fact that Airtel ran a series of advertisements, which you can see on TV right now, highlighting the Ookla results. This ad campaign did not sit well with Reliance Jio, which went on to take action by filing a complaint against Airtel.

Complaints and rejoinders
Jio lodged a complaint with the Advertising Standards Council of India (ASCI) against Bharti Airtel’s claims that it has the fastest network speed. Jio says it has also separately served a legal notice to Ookla for what it has termed as its "flawed" test.

Reliance Jio’s complaint to ASCI also mentioned 12 independent links on YouTube which were put up recently, showing the same flaw as “proof enough” that Ookla Speedtest app was unreliable.

"The claim of Airtel that it is India's fastest network is false, misleading and incorrect. The claim is being made by Airtel acting in a mala fide manner in collusion with Ookla LLC, who profess to be experts in the domain space of testing mobile Internet speed," stated the letter sent by Reliance Jio to ASCI.

A statement from Airtel followed. "We believe that this is a deliberate attempt to malign our brand and misguide customers through a campaign of misinformation, which is something we now come across on a regular basis, in particular, on social media platforms," the company wrote.

Ookla also released a statement saying it stands behind Airtel being named the fastest network. "When analysing markets, like India, we take many factors into consideration, including dual SIM devices, network technology, device types, and more. In addition to what the user sees on their mobile application as they take a test in real-time, we apply a rigorous methodology when aggregating the data which uses a variety of internal data sources that control for potential variability in the market. We have taken dual SIM information into consideration and fully stand behind Airtel being named 'India’s Fastest Mobile Network’."

Ookla also disputed Reliance Jio's statement that it has been served a legal notice.

What really happened?
At the centre of Jio’s case is the claim that Ookla Speedtest app results are flawed when you use dual SIM phones, and the way the results are displayed. Say you have your Jio SIM in the SIM2 slot, and your phone is set to use this SIM for mobile data. When you perform a speed test using Ookla’s Speedtest app and share the result, it opens a webpage that shows your telco as the one that’s been set as primary for calls. In other words, though you just used your Jio SIM to perform a speed test, the app seems to record the results under Airtel, if you’ve set your phone to see Airtel for voice calls by default.

If you want to see for yourself, this is what you need to do. Using a dual-SIM phone, set one SIM as the default for Internet, and the other for calls. Now, run Speedtest. Once you get the result, go to the Results page, and share the result. Open the resulting link and you'll see the name of the network, which will be the carrier that's set to default for calls. In our tests, it didn’t seem to matter if it's in SIM1 or SIM2 - it simply shows the name of the service provider that is the default for calls. That's because it's showing the "carrier", and not the "data provider”. 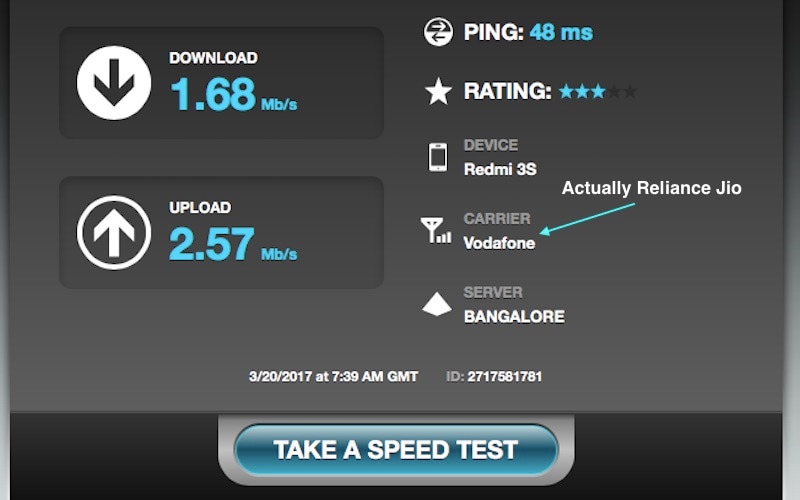 Because of this, Jio says that the Speedtest app results are flawed and can't be trusted, and wants them disregarded. But Ookla insists there’s nothing wrong in the way it records speed results.

"We go to great lengths to make sure the information we collect and share is accurate and reliable. The carrier displayed by the Speedtest mobile application is based on the 'Active Carrier' value returned by the Android API," the company explained. "This is typically the SIM in the first slot, although this may not always be the case. In our experience, we have found that the 'Active Carrier' does not always indicate the actual data provider in devices with multiple SIMs."

Since Ookla is aware of this, it actually uses secondary data points to confirm who the actual data provider is.

"In situations where multiple SIM cards are in use, we apply additional data sources during post-processing to help determine the actual data carrier with a high degree of confidence," it explained. "We use established third party sources to match the connection IP during the test to the actual data carrier IP blocks (the IP addresses attributed to a provider).”

In other words, Ookla says it can to detect your data provider - you can see for yourself by using the phone’s Internet connection as a hotspot - and any ‘misinformation’ is limited to displaying this information when you share your test results, and not in the overall results it compiles. This definitely seems like a curious bug, and it’s one that Ookla ‘expects’ to fix in the future.

"In the future, we expect to display the correct data carrier in dual SIM mobile devices at the time of the test,” the company told Gadgets 360.