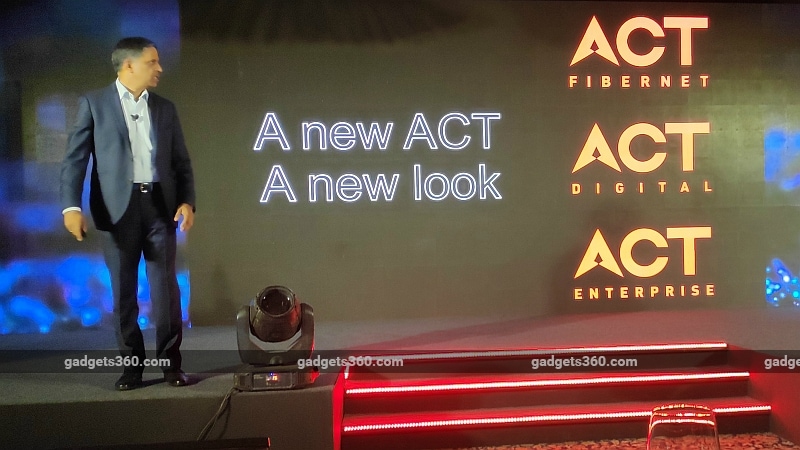 Though mobile data consumption in India is setting new records with the growth of smartphones, the state of fixed-line broadband connections in the country is still not at par with the global regions. One of the main reasons behind that is the lack of innovation among the established broadband players in the country. ACT Fibernet, which claims to be the largest retail fibre-based broadband company in India with 1.3 million broadband users, sees a huge opportunity in the market in the near future. The Bengaluru-based company has also prepared a roadmap to compete against the likes of Reliance's Jio GigaFiber.

"We have roughly 300 million houses, and the total [broadband] market is not even 22 million," says Bala Malladi, CEO, ACT Fibernet, in a one-on-one interaction with Gadgets 360. "And even in this, the high-speed broadband market is limited because most of them are DSL, ADSL of BSNLs of the world. BSNL holds, out of 22 million, 10 million [users]. Therefore, there is a huge opportunity here."

According to Telecom Regulatory Authority of India (TRAI) data released last December, the penetration of fixedline broadband in India is only seven percent, compared to the global average of 46 percent. This depicts the growth potential for broadband players, both new and established.

Started its journey as a cable company back in 2000, ACT Fibernet ventured into fixed broadband in 2009 — after acquiring Beam Telecom — and recently introduced a new brand identity.

"It [the new brand identity] is more of what we've constantly evolved, we've been working on it for a while — it's not an overnight update," asserts Malladi. "To that extent, this is a constant endeavour to actually upgrade yourself and make yourself relevant all the time."

Malladi highlights that unlike many other ISPs, ACT Fibernet sees the competition from Reliance Jio, which launched Jio GigaFiber as its high-speed fixed broadband service last year that is gradually rolling out in the country, as a positive development . "Obviously, Reliance Jio is a big company — they've got lots and lots of resources, and they're very good company," the executive states. "We expect that they'll do more good in terms of expanding the market. This market requires a huge amount of market making, and the potential is huge here."

Under the new brand identity, ACT Fibernet has brought two new brands, namely ACT Digital and ACT Enterprise, alongside the existing broadband-focussed ACT Fibernet. Together, these brands will cater to the existing base of over 2.5 million users, including its 1.3 million broadband users.

Malladi tells Gadgets 360 that the arrival of the new brands is essentially to communicate what all the company is doing for its customers. "The customer doesn't understand fully unless you communicate sufficiently," he says, adding that his team was working on developing the new brands for more than 18 months.

As a part of upgrading the business, ACT Fibernet has centralised all its 14 in-house call centres into two — primary in Hyderabad and secondary in Chennai. All this is aimed to offer 24x7 a uniform delivery of customer care services.

"We've changed the ways of doing things always for better", says Malladi. "But now, we're orchestrating in such a way that customers can feel."

Apart from launching newer ways for customers to interact and connect, ACT Fibernet is trying to reach young Internet audience in India by bringing content partnerships. The company has so far tied up with seven content providers, including ALTBalaji, Hooq, Hungama, Netflix, SonyLiv, YuppTV, and ZEE5. Malladi says the delivering of content through the network comes as a win-win situation for all — subscribers, content providers, and ACT Fibernet itself.

"There is a very underline, powerful way of delivering those content through our network," the executive mentions. "It is a double advantage for us. We have the power, and through that power, we deliver that to the customer — he'll able to consume it. That's exactly what we intend to do."

ACT Fibernet last year partnered with Amazon and Google to offer media streaming devices to its subscribers. Malladi tells Gadgets 360 that the initial response was quite good.

"We actually partnered with them [Amazon and Google] for two reasons," he reveals. "One reason was that we've been as a partner to keep giving more and more to the customers. Secondly, I think there is the latest trend for enabling a customer with new technologies like Google Assistant or [a device like] Fire TV Stick."

Aside from bringing video content sources, ACT Fibernet is in plans to meet the ongoing requirements of gamers specifically through some gamer-specific plans and partnerships with gaming laptop manufacturers, experience centres, and gaming cafes.

"The very first thing that we'll do is we'll understand and work with a couple of big game publishers to understand where their servers are located and how we can build our network there," explains Ravi Karthik, Head of Marketing, ACT Fibernet. "Gamers do necessarily want the highest speed but alongside the lowest pings. So you need to ensure that the routing of the traffic is done well."

Expanding in the north
ACT Fibernet was in the initial stages known as a South India player. But Malladi tells Gadgets 360 that the original image was changed after the company entered Delhi back in July 2016. "We're now actually going to concentrate on the North cluster," he says, adding that there are plans to launch broadband services in Lucknow, Jaipur, and Ahmedabad in the three months' time. The Jaipur and Lucknow launches happened earlier this month.

"We choose some of the cities where we believe that we can deliver it [broadband network] seamlessly," says Malladi. "The cities where we can't do it, we will not even touch them. One of the reasons why we didn't touch is the reason we felt that we don't have the ability to give that seamless experience to the customers."

ACT Fibernet currently operates in 17 Indian cities, including five states of Karnataka as well as Andhra Pradesh, Delhi, Tamil Naidu, and Telangana. But it is yet to begin its operations in some major cities like Mumbai. Malladi says that especially in the case of Mumbai, there aren't any concrete plans as of now.

"We as a policy follow two things," the executive tells Gadgets 360. "If we don't have end-to-end network control, we'll not deliver in that topology because all our customers are directly serviced by us. That's one thing that we want to be very careful about because, otherwise, you can't guarantee a service level. The second thing is that we have no history of fighting with local cable operators. We have so much to do in life, and that's the last thing we would like to do."

Highlighting the challenges, Malladi notes that delivering fixed-line broadband is quite an intensive job. "You need to create a network and make sure that your network is secured," he elaborates. "You have to have a combination of underground and overhead cable infrastructure. If you're only started doing it underground, it will take years to reach your customers. But at the same time, you must make sure that it's a proper combination."

ACT Fibernet kicked off its 1Gbps wired broadband Internet service in India in March 2017 to take on the competition. The service, dubbed ACT Giga, was initially launched in Hyderabad, though it's currently also available in Bengaluru and Chennai. Malladi, while speaking with Gadgets 360, mentions that network and technology readiness is in place for expanding the 1Gbps service into other cities, but the company needs an appropriate time to launch. The executive also hints at Delhi as the next city for ACT Giga. "If it all I have to choose a city, our obviously going to be the next is Delhi [laughs]," he says.

Notably, there are already 5,000 Wi-Fi hotspots across India that are being powered by ACT Fibernet. Malladi states that these hotspots deliver an average speed of 30-40Mbps. The company is also offering Internet access to various government schools and libraries that is touted to benefit 75,000 children. Moreover, based on the peak traffic and usage across the network delivered by ACT Fibernet, Malladi says that average consumer speeds come at 60Mbps.

Adheres to the philosophy of net neutrality
Alongside bringing the new initiatives and keeping expansion plans handy, Malladi tells Gadgets 360 that ACT Fibernet strictly believes in a 100 percent net neutrality and doesn't block access to VPNs and proxy websites — unlike some other ISPs.

"We have no say over what needs to be blocked, what needs to be stopped," affirms Malladi. "The only thing we follow is that we get a direction either from a high court or from the DoT (Department of Telecom). Only when we get a direction, we block it. And when we get a [follow-up] direction, we also unblock it. There is no question of us doing that at all. It is a net neutrality issue."