Jio Fiber plans may have been the tech news this week, but there were plenty of other happenings such as Chandrayaan 2 and of course launches at IFA 2019. 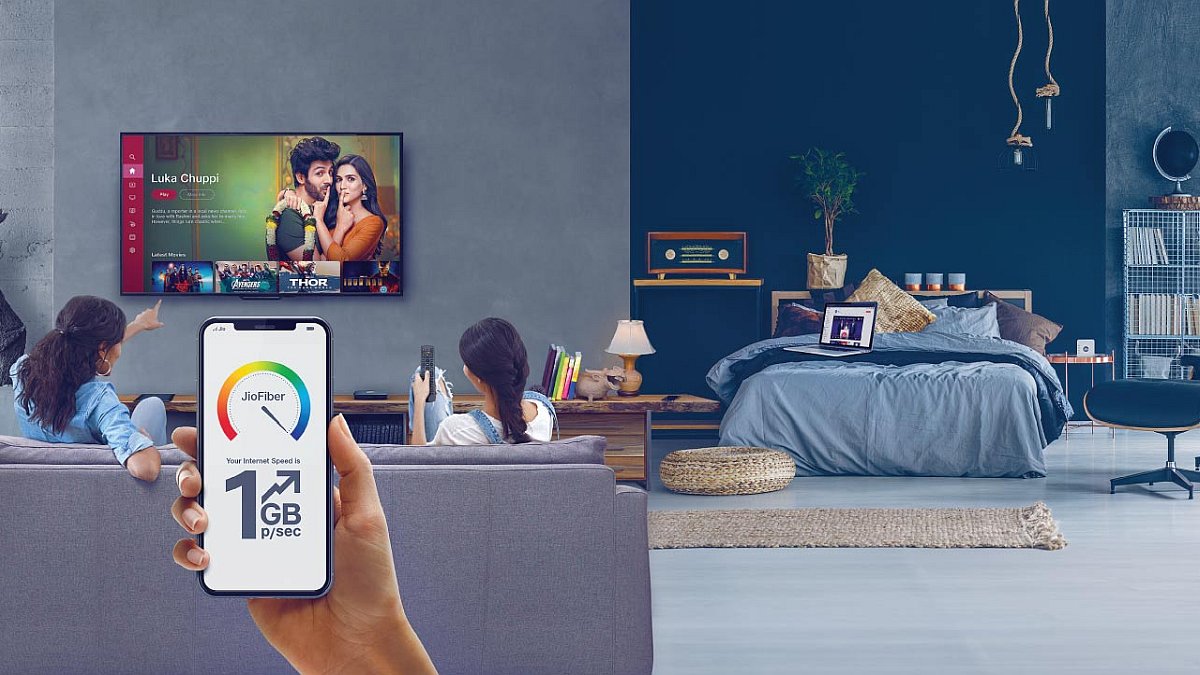 Jio Fiber plans start at 100Mbps speeds, but go up to 1Gbps

Jio Fiber was commercially launched this week, and it is certainly the highlight in terms of tech news of the past 7 days. Telco Reliance Jio detailed Jio Fiber plans subscribers can avail, and it also explained the process of migration of Jio Fiber preview subscribers to the new plans. This week also saw the IFA 2019 trade show take place in Berlin, Germany, where mobile manufacturers like HMD Global (Nokia brand), LG, Motorola, and Sony all unveiled new smartphones. Separately, brands like Realme and Samsung announced the launch date of upcoming smartphones in their India lineup, such as the Realme XT and the Samsung Galaxy M30s. Read on for all the top news stories of the week.

Jio Fiber was announced over a year ago as Jio GigaFiber, and has been available to millions under a preview offer since then. On Thursday however, Reliance Jio finally unveiled the commercial rollout of its fibre-to-the-home (FTTH) broadband service. Reliance Jio is offering more than just a broadband service, and subscribers can enjoy such add-ons as a landline service, the Jio Set-Top Box entertainment and gaming services, as well as bundled mobile plans. The Jio Fiber will be available in 1,600 towns across India.

Let's start with the Jio Fiber plans. For now, the broadband service has been launched with six prepaid plans. These are Bronze, Silver, Gold, Diamond, Platinum, and Titanium. All of these, except the Titanium plan, come with additional data over and above the fair-usage policy (FUP) data limit. As with plans of other operators, users have access to unlimited data, but can enjoy high-speed data only up till the FUP.

A Jio Fiber Welcome Offer was also unveiled for those who opt for JioForever annual plans, and these subscribers get additional features like the Jio Home Gateway device (worth Rs. 5,000), Jio 4K Set Top box (worth Rs. 6,400), two months of extra service, and up to double data. Bronze subscribers get free three-month access to JioCinema and JioSaavn apps. Silver subscribers get a three-month subscription to OTT apps in addition, while Gold, Diamond, Platinum and Titanium plan subscribers will get an annual subscription to the OTT apps – for now, Jio has not detailed which OTT apps exactly it is referring to.

Other freebies such as free Bluetooth speakers, free HD TVs, and free 4K TVs have been detailed for those subscribing to the Jio Forever plans with 12-month validity. You can check out details of the freebies in our previous coverage, as well as how to book your connection, what the process is for those who are already on the Jio Fiber Preview plans, as well as details of installation charges and security deposits. We've also compared the Jio Fiber plans and offers with those of rival ISPs, such as Airtel, BSNL, ACT, and You Broadband.

Vivo this week launched the second smartphone in its Z-series in India. The Vivo Z1x has been priced at Rs. 16,990 for its 6GB + 64GB variant, and Rs. 18,990 for its 6GB + 128GB variant. Both will go on sale from September 13 in the country, via Flipkart and the Vivo India E-Store. Vivo has also detailed launch offers for the smartphone.

The week past saw the Chinese electronics giant make several announcements. These included the Mi A3 going on open sale in India, the rollout of an Android 10-based MIUI 10 stable update for the Redmi K20 Pro in China, as well as the launch of a Pearl White colour variant of the Redmi K20 Pro and Redmi K20 in India.

Other Xiaomi announcements from this week included one where the company said it had managed to sell 100 million smartphones in India since its launch five years ago, a teaser of TV-focused India launch on September 17 – which may be the Redmi TV 70 launch for the country, an MIUI 10 ad switch tool test, as well as the upcoming announcement of Mi Charge Turbo wireless charging tech on the upcoming Monday.

Realme had an eventful week. The Oppo spinoff brand this week announced the India launch date of its 64-megapixel camera smartphone – the Realme XT – which has been set as September 13. The smartphone has been detailed in the past, and we've also spent some time with it – you can read our Realme XT First Impressions to get an idea of what the smartphone will offer.

Realme also announced the Realme Q launch in China. The Realme Q is essentially a rebranded Realme 5 Pro for China. Its price in the country starts at CNY 998 (roughly Rs. 10,000), and it will go on sale from Monday.

At IFA 2019, Lenovo owned Motorola Mobility launched two smartphones – the Motorola One Zoom (First Impressions) and the Moto E6 Plus (First Impressions). We managed to spend some time with both are smartphones, are you can read our first impressions of the two devices in the above links.
The Motorola One Zoom has been priced at EUR 429 (roughly Rs. 34,000), and its specifications include Android Pie, a 6.4-inch full-HD+ OLED display, a Snapdragon 675 SoC, 4GB of RAM, a quad rear camera setup (48-megapixel + 16-megapixel + 8-megapixel + 5-megapixel), a 25-megapixel selfie camera, an on-screen fingerprint sensor, and a 4,000mAh battery.

On the other hand, the Moto E6 Plus starts at EUR 139 (roughly Rs. 11,000), and its specifications include Android Pie, a 6.1-inch HD+ IPS display, a MediaTek Helio P22 SoC, up to 4GB of RAM, a dual rear camera setup (13-megapixel + 2-megapixel), an 8-megapixel selfie camera, up to 64GB of inbuilt storage expandable via microSD card (up to 512GB) with its own dedicated slot, a rear fingerprint sensor, and a 3,000mAh battery.

The Lenovo K10 Note specifications include a 6.3 full-HD+ display, a Snapdragon 710 SoC, up to 6GB of RAM, up to 128GB of inbuilt storage, a triple rear camera setup (16-megapixel + 8-megapixel + 5-megapixel), a 16-megapixel selfie camera, a rear fingerprint sensor, and a 4,050mAh battery with 18W fast charging support.

Finally, specifications of the Lenovo A6 Note include a 6.09-inch HD+ display, a MediaTek Helio P22 SoC, 3GB of RAM, a dual rear camera setup (13-megapixel + 2-megapixel), a 5-megapixel selfie camera, 32GB of inbuilt storage, a rear fingerprint sensor, as well as a 4,000mAh battery with support for 10W fast charging.

LG G8X ThinQ launch at IFA
LG at IFA 2019 launched the LG G8X ThinQ, which will also be made available in a 5G variant in South Korea called the LG V50S ThinQ 5G. The smartphone works with a 6.4-inch full-HD+ secondary display, called the LG Dual Screen, which connects via USB Type-C. The price of the LG G8X ThinQ or LG V50S ThinQ 5G has not yet been announced, as with most LG launches, and such details should become available closer to local availability.

The Sony Xperia 5 price has not yet been detailed, but it will go on sale from October 2019. Specifications include Android 9.0 Pie, a 6.1-inch full-HD+ OLED display, a Snapdragon 855 SoC, 6GB of RAM, 128GB inbuilt storage expandable via microSD card (up to 512GB), a triple camera setup (with three 12-megapixel cameras), an 8-megapixel selfie camera, and a 3,140mAh battery.

Samsung had a pretty exciting week as well. The South Korean electronics giant this week announced that it was launching the Galaxy M30s smartphone in India on September 17. The company has detailed a few specifications of the smartphone ahead of the launch.

Separately this week, Samsung told Gadgets 360 that it would launch the Galaxy M10s and a 3GB RAM variant of the Galaxy M30 in India before Diwali. The Samsung Galaxy A90 5G was also launched by the company this week in South Korea, priced starting at KRW 900,000 (roughly Rs. 53,100).

Finally, the much-delayed Samsung Galaxy Fold was relaunched in South Korea. To recall, the foldable smartphone's launch was embarrassingly delayed after early adopters found flaws with it. Separately, Samsung also cancelled pre-orders of the smartphone, giving users the option to reconsider their choice.

Non-mobile launches at IFA 2019
There were of course several launches at IFA 2019 this week, not related mobiles phones. These included the Razer Blade Stealth 13 refresh, a whole bunch new Amazon Fire TV products were also showcased, new laptops and other PC products from Asus, and a bunch of PC related announcements by Acer.

There were also numerous different PC products launched by Lenovo, which apart from the Yoga laptops, included new tablets, and ThinkBook refreshes. Google also detailed a new Ambient mode for the Google Assistant, as well as extended voice command functionality for WhatsApp calling. Finally, Qualcomm at IFA 2019 said it would be launching 5G-integrated mobile SoCs across the Snapdragon 8, 7, and 6 series in 2020, and also named manufacturers who had already signed on for these processors.

Chandrayaan-2 moon mission this week had an important objective to carry out – soft landing the Vikram module (named after Vikram Sarabhai, considered the Father of the Indian space programme) on the Moon. Unfortunately, things did go as planned, and ISRO lost contact with the lander 2.1 kilometres from the lunar surface. The Vikram lander notably also contained the Pragyan rover. Data from the landing was under analysis, ISRO said at the time.

Since then, ISRO has issued a statement saying that the Chandrayaan-2 mission was unique, and one it is proud of. It added the mission had completed 95 percent of its objectives, and hence could be considered a success. The lifespan of the orbiter was also found to be much longer than initially planned thanks to “precise launch and mission management.”

Chandrayaan-2 Will Have No Impact on Future Missions, Like Gaganyaan: ISRO Official
Apple, Foxconn Broke a Chinese Labour Law to Build Latest iPhones