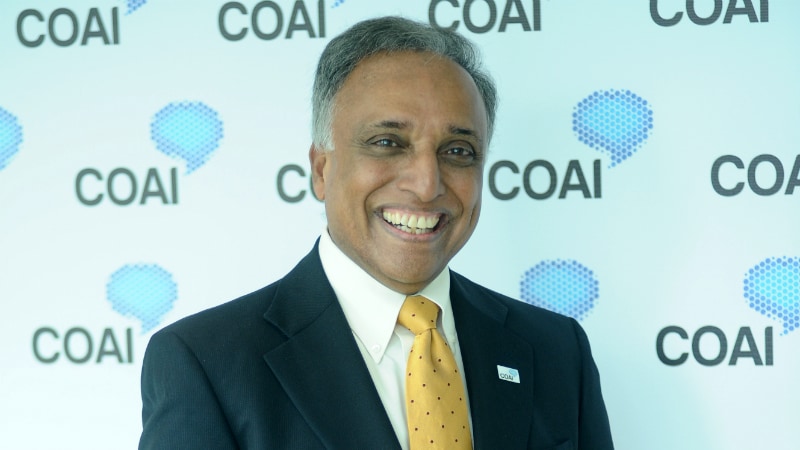 The Cellular Operators Association of India (COAI) is the industry body that represents the interests of cellular operators in India. COAI is hosting the second edition of India Mobile Congress (IMC) in New Delhi this week. The three-day event kicks off on Thursday where a large number of industry players and government officials will come under one roof.

"One of the things that we continuously want to do and the impetus for our starting IMC is that India, the South Asia area has unique issues that need to be locked at uniquely,” COAI Director General Rajan S Mathews tells Gadgets 360. "We want to be looking at things like how do we get into 5G and how do we establish 4G. We're also looking at international participants."

This year's IMC will devote 20 to 30 percent of space to devices, which tend to be what the end-users tend to be most interested in. "We also expect over a lakh of feet — so about 15-20 thousand people visiting our exhibition space and have a hands-on experience,” says Mathews.

India already has over a billion mobile phone users. But unlike the initial phase when telephony was the utmost important area, people with mobile devices in the country nowadays largely demand faster data access, ability to stream high-quality video content, and always-connected networks. All this has brought a number of challenges for telecom operators as they need to fulfil the demands of customers by enhancing their existing infrastructure while balancing revenue. This is where COAI comes in.

Mathews asserts that the COAI works in tandem with the government to realise the objectives of its members. The industry body was notably established in 1995 and at present includes all the major mobile operators, broadband players, and telecom equipment makers.

"Because the government plays a heavy role in terms of the regulatory and policy environment, we have to work very closely with them and we have to ask ourselves that how do we effectively engage with the government, regulators, and the judicial processes to ensure that we can get to where we need to,” says Mathews.

"What we try and do is to make sure that there is a level playing field for all operators with regard to policy and regulations,” he adds. "Today, we have a larger ecosystem. We just don't play with the TSPs (telecom service providers), we have Facebook, Google, Huawei, and Qualcomm. So we don't only think of our sovereign interests — we do — but in the larger context, we do pull in the ecosystem in terms of the equipment OEMs and others who are looking at the Indian market as their business areas. This is how we involve ourselves to ensure that the health of the industry, both from the competitive landscape and from the policy and regulatory perspective, continued to be addressed so that we can go forward."

"The other big thing that we struggle with is the financial health of the industry. Massive investments are required, and the government has basically thrown its arms up and saying look we've got enough challenges feeding housing, clothing, and electricity for the people and that's why we've given it over to you guys," he continues.

The COAI is actively asking the government to reduce the financial burden of telcos by removing charges. "We have consistently said to the government that why do you continue to double tax us — tax used in the context of taking money upfront for spectrum and at the same time continuing the legacy issue of licence fees and spectrum usage charges," he says.

Mathews is of the opinion the government needs to actively act against unregistered telemarketers and educate people on how to get registered on Do Not Disturb (DND) database.

"When you look at what TRAI is proposing, we said please do a cost-benefit analysis," he says, adding, "Because when we looked at the challenges, we found that the biggest area of non-compliance was from unregistered telemarketers. That's been the biggest issue and nothing that's been proposed at the UCC level addresses the issues created by these unregistered guys.”

He also highlights that spreading awareness about state-run initiatives is important as only about 20 to 30 percent of the total mobile subscribers have so far signed up for the DND database. Further, the executive points out that apart from pesky voice calls and SMS messages, these are the OTT apps such as WhatsApp and Facebook Messenger, emails, and social media networks like Facebook and LinkedIn from where spam content is circulating at the moment.

"The limitations exist because for example we can't stop a packet, look at it, find what's in the packet before we send it," says Mathews. "We are precluded from doing that. This is where the government has to say look you need to shut down your website or a source that is originating spam calls or messages."

Aside from spam calls, call drops is a big problem facing end-users where government has been pushing the telcos to do more. Mathews says that while telcos are making investments to reduce call drop complaints — over 3.5 lakh Base Transceiver Station (BTS) units were installed in the last year alone, he says — municipalities in local areas need to cooperate to expand the coverage of existing infrastructure. "When you disaggregate, some of the major areas, especially in the urban areas, there are pockets where it is very difficult to get coverage... It is because of the inability to get cell towers up and running in the time frames we require," he adds.

Despite being a market of few players, the Indian telecom industry has brought offerings such as unlimited plans and ultra-affordable data packs that means Indian consumers enjoy data rates that are much lower than pretty much any other market. Mathews forecasts that the existing benefits will continue to be provided in the long run. "Once consumers are fed on sugar, it's very hard to get them off," he says. "So these unlimited plans and packs, I think, will stay."

"Stimulating demand is not a bad thing, the only question is how do you monetise the demand. That will be something that operators will have to look at," he adds.