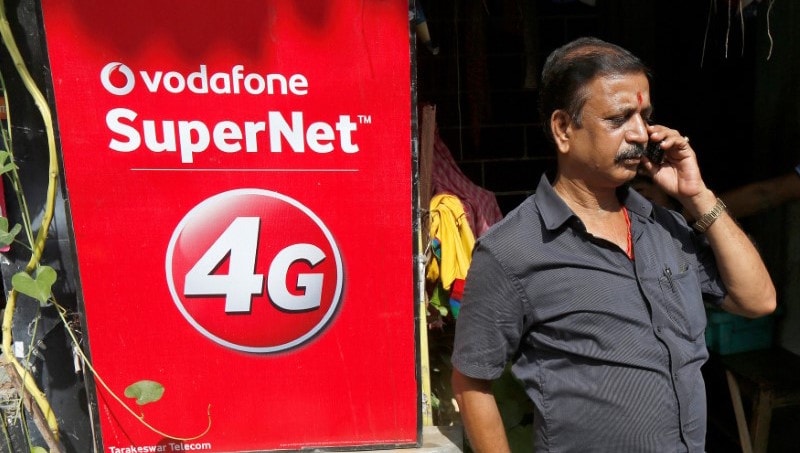 Vodafone's $7.2 billion (roughly Rs. 47, 884 crores) cash injection into its Indian business has turned up the heat just days ahead of an $84 billion (roughly Rs. 5,58,646 crores) airwave auction which could decide who wins and loses in one of the world's fastest-growing telecoms markets.

Spending may fall well short of that huge target.

But, industry insiders and advisers say, the race for premium spectrum will carve up 4G airwaves, and the spending splurge could even decide the size and timing of one of India's largest listings: Vodafone's own Indian IPO.

India's telecom sector is crowded, cut-throat and often money-losing. Many carriers struggle under multi-billion dollar debt piles left by past auctions, prompting industry bodies to caution that high prices - as the government scrambles to close its budget deficit - could dampen future investment.

But few players will be able to sit out India's biggest auction, potentially more than double the size of all three past auctions. It will be a test of self-discipline, analysts and industry insiders say, but Vodafone's cash boost is a sign of how high stakes will be when the sale begins on Saturday (October 1).

The arrival of Reliance Jio, a carrier backed by oil and gas giant Reliance Industries, has shaken up the sector in the past month, as it injects more than $20 billion (roughly Rs. 1,33,011) to offer customers free data, calls and subsidised smartphones.

To battle Jio, analysts and industry players say, nationwide premium 4G services are a must. Both Vodafone, number 2 in India, and third-ranked Idea Cellular have 4G services in just about half of India's 22 telecoms regions.

"For two operators at least, this is the auction to make their data bets clear," said Sanjay Kapoor, former CEO of top mobile carrier Bharti Airtel's India and South Asia operations. Vodafone is "basically telling you 'we are making a bet'."

All eyes are on the premium 700MHz band spectrum, which is being put on block for the first time and accounts for half the estimated value of the auction. But its steep price - of $1.7 billion per megahertz - could deter bidders, industry executives say, and interest could shift to the 1800 MHz band that can also do 4G and is available at less than a quarter of the price.

Airtel and Jio have nationwide offerings. But both are also expected to bid, largely to deal with volumes, raising interest and prices.

Ahead of Vodafone's cash injection, analysts had expected more cautious bidding. But the blind auction rarely undershoots: last year, the government raised a third more than it expected.

"Despite a lot of scepticism, this will be a well participated auction, particularly for the people who do not have a good 4G footprint," said Sandip Das, senior adviser at industry consultant Analysys Mason and a former telecoms executive.

IPO ahead?
Vodafone has long been expected to list its Indian unit next year - an exercise in increased brand recognition as well as cash raising in a country with 1 billion phone subscriptions. It is expected to raise $2 - $3 billion (roughly Rs. 13,302 crores to Rs. 19,954 crores) and could be India's biggest offering.

How the spectrum sale goes, how much is spent and where, could decide the size and timing of Vodafone's market debut, a person with direct knowledge of the listing process said. Part of the $7.2 billion will be used to pay down debt.

"We will take a call after the spectrum auction. Nothing before that. It's too big an event," the person said. "Difficult to say how aggressively Vodafone and Bharti will bid. People are keeping their cards close to their chest."

Vodafone declined to elaborate on the listing. It has been expected to make a decision by the end of this year. "We are on schedule as per our internal timeline. We haven't disclosed the timeline," a spokesman for the Indian unit said.

The monthly average revenue per user (ARPU) for India's telecoms industry, where many still use basic phones, was only 127 rupees ($1.90) in January-March, according to the regulator.

But Vodafone has crossed 200 million customers, including 107 million in rural areas, bringing it closer to Bharti's more than 257 million subscribers.

The upcoming auction will determine how fast Vodafone can catch up with Bharti and Jio on 4G. The majority of Vodafone's revenue still comes from Europe, but a 22 percent market share in India contributes about 12 percent of sales.

Bharti, Vodafone, Idea and Jio did not comment on their auction strategy.