Ericsson Wants to Be the Frontrunner in Bringing 5G to India

As India gets ready to embrace 5G, Ericsson wants to play a key role in bringing the next-generation telecom services to the country. The Swedish telecom gear manufacturer on Thursday launched its new radio solutions family called Street Macro that is designed to enable 5G services in the Indian market. The new radio solutions, which will be available later this year, will support Massive MIMO (Multiple-Input and Multiple-Output) antenna technology that is aimed to enhance network delivery. Alongside the solutions, Ericsson is set to highlight key use cases and support new applications of 5G to make the market ready ahead of its formal rollout that is visioned for 2020.

"Everything and anything that has been deployed for 4G today will support 5G as well," Nitin Bansal, Managing Director, Ericsson India, told Gadgets 360 at the sidelines of an event in Gurgaon on Thursday where the company showcased its offerings that debuted at Mobile World Congress (MWC) 2018 in Barcelona earlier this year.

"What we are looking at is how do we prepare the networks so that tomorrow when 5G is launched, it would become very easy to move from 4G to 5G. We don't want to make it a revolution - it's, in fact, more of an evolution, which is starting now," he added.

The new range of solutions includes Streetmacro 6701, AIR 4455, and AIR 1281 to densify networks in urban areas where there are no rooftop sites available, while Massive MIMO-equipped AIR 3239, AIR 5331, and AIR 3252 are designed to increase existing network capacity in metropolitan areas. For remote areas, Ericsson has the 5G NR Radio Dot that is rated to deliver speeds of up to 2Gbps using new 5G mid-bands. 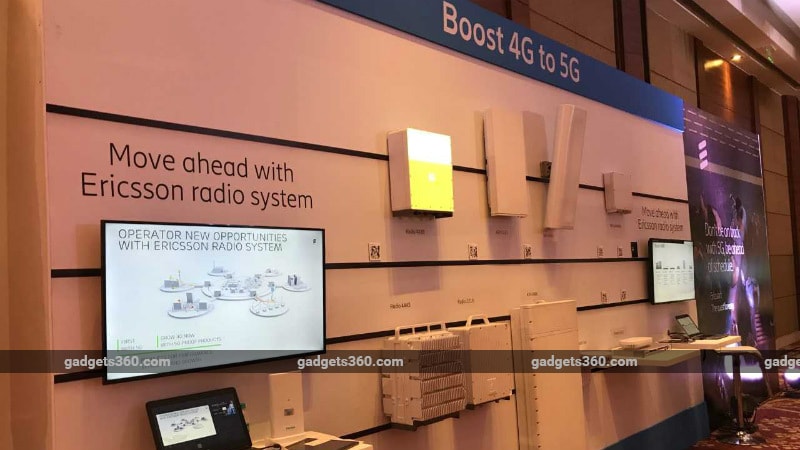 Bansal revealed that deployments of the new models will begin in the second half of 2018, while the solutions will be available commercially by the end of the year. Furthermore, telecom operators who have already deployed radio solutions from Ericsson will be able to join the 5G rollout through a remote software installation. "Everything we have delivered since 2015 is software upgradable," Bansal told Gadgets 360.

As the requirements around 5G are varied, Ericsson is developing customised solutions to enable the next-generation services in India.

"Depending on the requirements of India and depending on the spectrum allocated in India, we are building customised solutions for India," stated Bansal. However, the executive doesn't see any major differences when comparing the rollout of 5G services in India against their availability in developed regions, such as the US. He noted that the key 5G use cases - including enhanced mobile broadband and fixed wireless access - will be the same across the globe.

"The enhanced mobile broadband will remain constant across the world, and the fixed wireless access will have no change globally," asserted Bansal. "But obviously, in critical and massive machine-type communication, the end application could be different. However, its underlying technology will remain the same. We could use the critical and massive machine-type communication in India for agriculture, while someone else is using it for self-driving cars."

Intel Aims to Democratise AI, Set Up Stage for 5G in India

Ericsson predicts that the arrival of 5G in India will help the mobile data traffic increase as much as 11 times. This is more than the 8x growth projected for the global markets. Having said that, it is believed that the existing 4G services will set to base for 5G. "4G is going to be the foundation for 5G," stated Bansal.

The relation between 4G and 5G makes it easy for telcos to switch from existing services to fresh models. Also, this enables a smooth transition from one network generation to another. Bansal believes that there isn't any particular challenge in the journey towards 5G, though there is a need for a proper infrastructure.

"Challenge, I would say, is not the right word here," said Bansal, adding, "But for 5G, you need infrastructure, which involves network preparedness, readiness, spectrum, and what to use it for - the applications. All these are currently work in progress."

In addition to the launch of the new radio solutions family, Ericsson showcased over 20 state-of-the-art developments at a "Do Zone" exhibition that give a glimpse of what 5G will bring to the market. The demonstration area previewed centralised and decentralised radio architecture, core and Radio Access Network (RAN) virtualisation, network slicing, 5G deployment scenarios, transport evolutions, and insight-driven automated operations. It also featured the future concepts of Augmented Reality (AR) and Virtual Reality (VR) that will be backed by 5G networks.

Last year, Ericsson tied up with Bharti Airtel for 5G development and previewed the future by showcasing a 5G testbed. The company has also partnered with IIT Delhi to roll out a '5G for India' programme in the country to bring localisation to its existing 5G solutions.

One of the early projects that came from the partnership was on water management, dubbed Aquaponics, that is based on Internet of Things (IoT) and is running in Andhra Pradesh. Bansal suggested that these developments will be expanded and new applications will emerge with the launch of 5G.