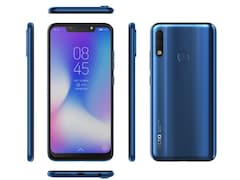 As far as the cameras are concerned, the Tecno Camon IClick2 on the rear packs a 13-megapixel primary camera with an f/1.8 aperture, and a 5-megapixel camera. It sports a 24-megapixel camera on the front for selfies with an f/2.0 aperture and a pixel size of 1.8-micron.

The Tecno Camon IClick2 runs HiOS 4.1 is based on Android 8.1 and packs 64GB of inbuilt storage that can be expanded via microSD card (up to 128GB) with a dedicated slot. The Tecno Camon IClick2 is a dual-SIM (GSM and GSM) mobile that accepts Nano-SIM and Nano-SIM cards. It was launched in Aqua Blue, Hawaii Blue, and Midnight Black colours.

Connectivity options on the Tecno Camon IClick2 include Wi-Fi, GPS, Micro-USB, 3G, and 4G (with support for Band 40 used by some LTE networks in India) with active 4G on both SIM cards.