Four years since the iPad mini 4's launch, its successor — the iPad mini (2019) — is here. It's the most “pocketable” iPad that you can buy right now, even if it'll only fit in a coat pocket. While the iPad mini now has serious processing power under its hood, this tablet is all about the form factor. When we reviewed the iPad Pro, our usage was almost completely geared towards getting work done while sitting at a desk. With the iPad mini it was the opposite.

Every time we picked up the iPad mini (2019), we immediately felt like slouching into our chair and unwinding. It became our go-to device to read something on, to listen to audiobooks, watch movies, and to play games. The iPad mini is easy to carry when commuting and is perfect for watching videos on while commuting to and from work. For a device that's perfect for casual use, it is a bit surprising that the iPad mini was basically in cold storage for years.

Not all products in Apple's impressive lineup of gadgets get refreshed frequently. Some, such as the iPhone, Apple Watch, and MacBook Pro, have been refreshed more or less annually, but there are others such as the Mac Mini, Mac Pro, and the iPad mini, which have gone for long periods without a refresh.

For the past few years the iPad launch cycle has been dominated by the iPad Air and iPad Pro series. Last year, Apple launched the iPad (2018), and it remains the most affordable iPad model in the market. This makes buying the iPad mini (2019) a slightly less straightforward decision. It has a smaller screen than the iPad (2018), but is powered by a newer and more capable processor, and costs more.

The iPad mini 4 had launched at Rs. 28,900 for the 32GB Wi-Fi only variant. The iPad mini (2019) costs more, but that is most likely due to changes in currency exchange rates and taxes because the US price of both products was $399 at launch. It's good to see that despite this, the iPad mini (2019)'s price in India is pretty close to its US pricing.

The iPad mini (2019) also supports the first-generation Apple Pencil which is priced at Rs. 7,600. This is a nice touch for artists and those who like taking hand-written notes, but it would have been nicer to have had support for the second-generation Apple Pencil which can be charged wirelessly. That would have probably pushed prices up even more so it's easy to see why Apple decided to stick with the older Apple Pencil. The iPad Pro (2018)'s design with its flat edges also allows a natural place for the Apple Pencil to charge wirelessly, but the new iPad mini uses the same body as its predecessors, not the new style of the iPad Pros.

The iPad mini (2019) looks a lot like its predecessor with thick bezels all around the screen. The bezels are thicker at the top and bottom and thinner on the sides. The home button, with its integrated Touch ID fingerprint reader, lies just below the display. There's a 7-megapixel front-facing camera above the screen. The power button and a 3.5mm headphone jack are at the top of the iPad mini (2019), while the speakers and the Lightning port (for charging) are at the base. There's an 8-megapixel rear camera on this device, with no camera bump. The volume buttons are on the right, and the Wi-Fi + Cellular variant has a SIM tray there as well.

There's no Smart Connector on the iPad mini (2019) and that means it doesn't support the Smart Keyboard Cover. It seems Apple wants people to use the iPad mini (2019) as their go-to device for casual use, whereas the iPad Air (2019) launched at the same time or the iPad Pro (2018) are positioned for entertainment as well as productivity.

The larger screens on those two devices mean that the Smart Keyboard Cover is just about large enough to not feel cramped. A similar cover for the iPad mini (2019) would most probably be a bit too small to type on comfortably, so we can't fault Apple for making that choice.

The 7.9-inch display of the iPad mini (2019) may be small for an iPad but it's a really good screen. Our only complaint is that the iPad mini (2019)'s thick bezels make it look outdated at this point. It would be nice to have an iPad mini with Face ID and a smaller body, but that might drive the price up, which is something that we definitely don't want to see for this device.

The iPad mini (2019) supports True Tone adjustment for its display, which essentially means that it can adjust the colours on the screen according to the lighting conditions wherever you are. This makes colours appear more consistent in different environments. This is a very useful feature to have, one you probably won't notice until you disable it. This device doesn't feature ProMotion though, which delivers refresh rates of up to 120Hz for fluid scrolling. While ProMotion is nice to have, we didn't miss it much on the iPad mini (2019). 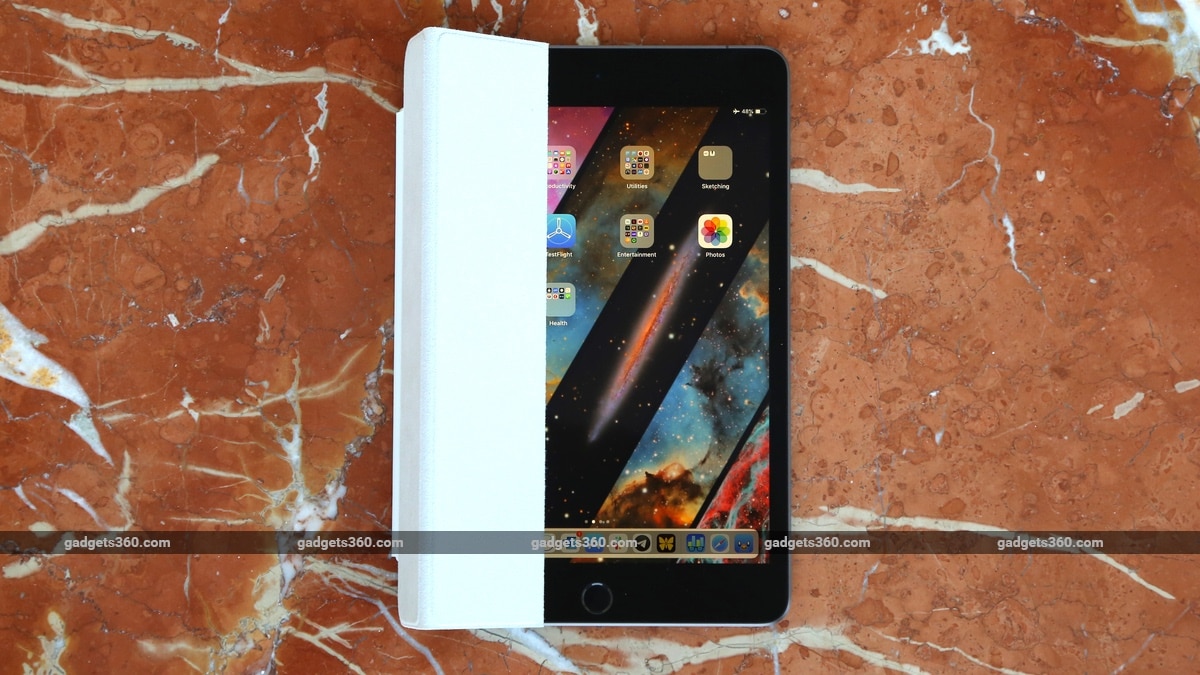 The resolution of the iPad mini (2019) display is 2048x1536 at 326 ppi (pixels per inch). While Apple says the device has a “fingerprint-resistant oleophobic coating”, we noticed that the display is a fingerprint magnet. These marks won't bother you much when you're using the device but they are visible when the screen is off. We also received a Smart Cover case for review, and so whenever the display was off, we'd cover the screen as well, which helped keep the device looking clean.

The Smart Cover worked well for the most part, but it tends to leave marks on the display along the two grooves on the case. This is a purely cosmetic issue and it doesn't affect the iPad mini (2019)'s display in any way. We noticed this with the Smart Keyboard Cover for the iPad Pro (10.5-inch) as well.

Once you turn the display on and start using the iPad mini (2019), you'll be hard pressed to find a reason to complain. The display is excellent for watching movies or TV shows on, playing games, and for general use. We tested all of these use cases and came away impressed with the display.

The iPad mini (2019) is powered by Apple's A12 Bionic chip, which also powers the iPhone XS, iPhone XS Max, and iPhone XR. We were quite surprised to see Apple's best chip on one of its most affordable products. While Apple doesn't officially reveal how much RAM is in its iOS products, benchmark apps showed that our iPad mini (2019) had 3GB of RAM.

In spite of the serious horsepower that the iPad mini (2019) packs, we rarely used it for demanding productivity-oriented tasks. We used it a lot for reading articles online, playing games (mostly Hearthstone), and watching shows (such as Game of Thrones). None of these tasks were too taxing for the iPad mini (2019), and it breezed through all of them. 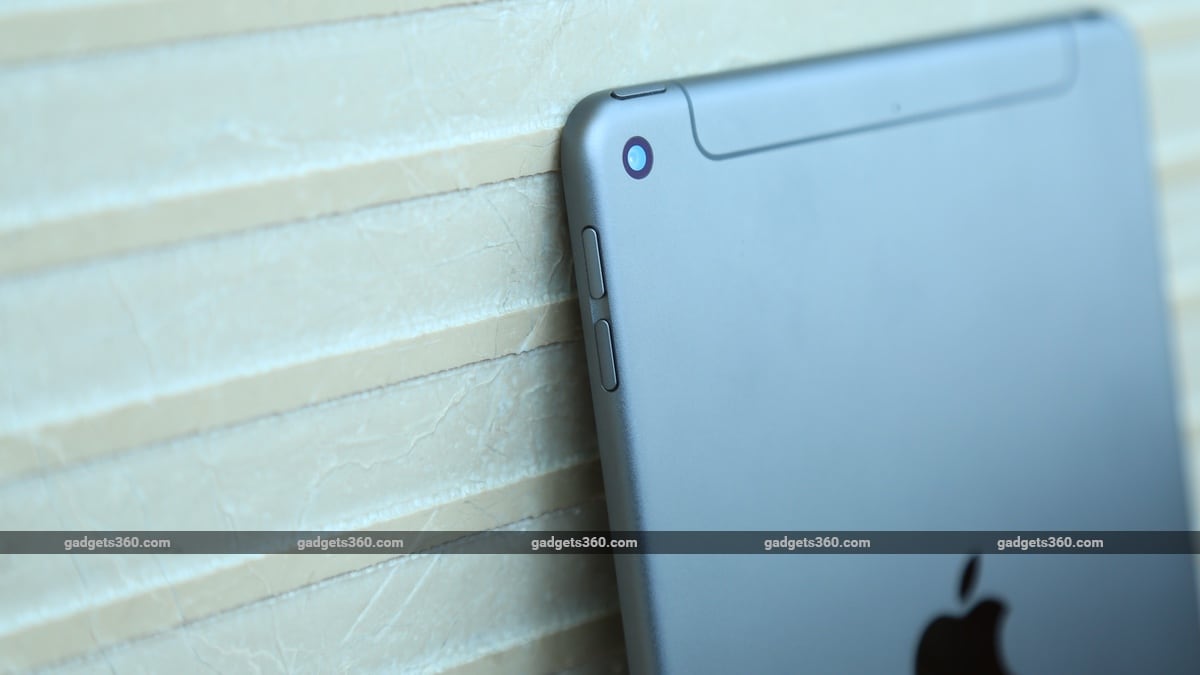 If you're going to be using the iPad mini (2019) primarily for gaming, you definitely won't be disappointed. We fired up quite a few of the games on our iPad including PC and console-grade titles such as The Witness and Civilization VI, and the tablet managed to handle them quite well. There were no noticeable performance issues even when we switched between apps and games.

We found ourselves wishing for a larger display and better speakers on the iPad mini (2019) when we were watching Game of Thrones at home. Compared to the iPad Pro models, we really missed having a nice pair of speakers on both the top and the bottom of this device. Those speakers improve the audio experience a lot on iPads and it's a shame that the iPad mini (2019) only has two speakers (near the Lightning port).

However, when commuting to work, the smaller screen size and compact form factor felt like a blessing. This device didn't add too much weight to our overloaded backpack and we could easily take the iPad mini (2019) out or put it back in during the journey. This might seem trivial but when you are travelling in Mumbai's crowded trains, it's a big deal. We tried using the iPad Pro (10.5-inch) quite frequently while travelling in trains, and we think the iPad mini (2019) is far better suited for use during commutes.

Some might say that the compact form factor is also better suited for photography. That may be true, but it's not an essential feature for us as we don't see ourselves using the iPad for photography — smartphones do that job well enough. The cameras on the iPad mini (2019) are pretty average when compared with those on the iPad Pro (2018). We used the front camera mostly for FaceTime video calls and it got the job done without any issues. 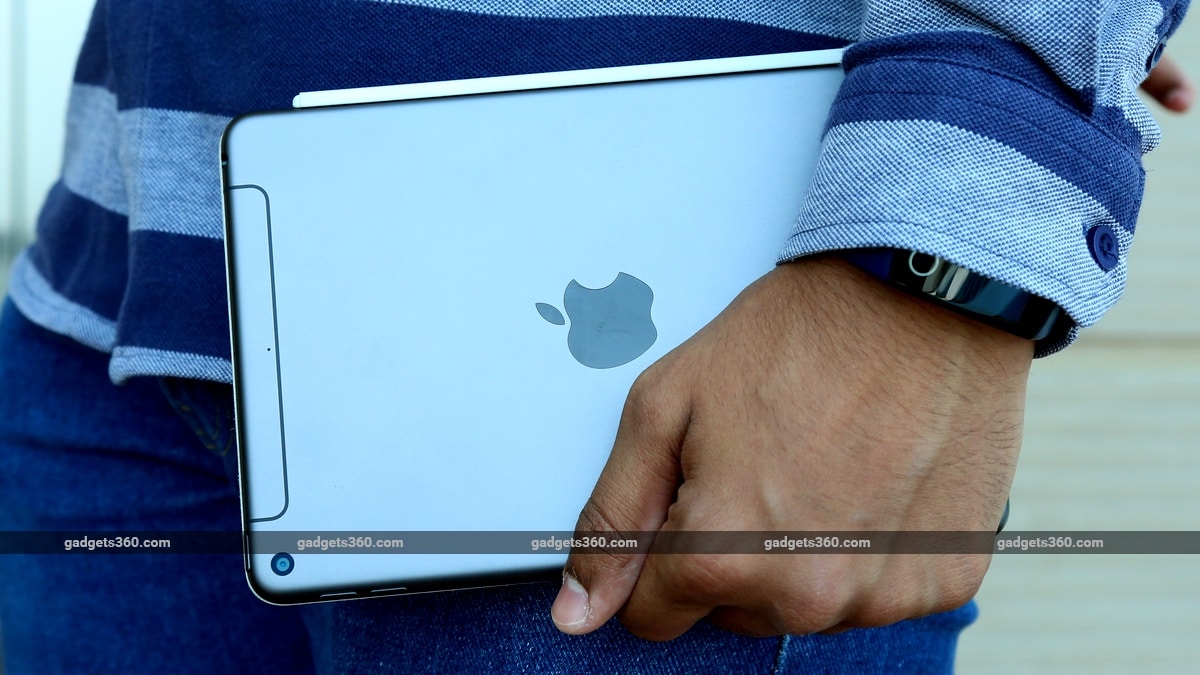 iPad mini (2019) is compact and easy to carry around

The iPad mini (2019) ships with iOS 12 and it runs smoothly on this device. We tried opening three apps at the same time (two in Split View and a third “floating” app) and it worked just fine. The 7.9-inch display made this feel a little cramped at first, but that might be because we've become used to larger iPads. Towards the end of the review period, the smaller screen stopped bothering us entirely. iOS 12 scales pretty well, and so did the apps and games we used.

Verdict
The iPad mini (2019) is a fantastic tablet overall. It's definitely not geared towards heavy productivity-oriented use, but it's almost perfect for casual use. Its form factor is perfect for commutes or travelling, and it's got really powerful hardware so performance and battery life are excellent as well. The design is pretty outdated at this point but we don't think that's going to a dealbreaker for anyone.

That brings us to the pricing of the iPad mini (2019). As we stated earlier, the starting price of Rs. 34,900 is not too far from the US price, but it's still slightly on the higher side. The sixth-gen iPad (2018) has an older processor and an inferior display, but it's also priced at Rs. 28,000 and has been available for as little as Rs. 21,999 at times. Yes, the iPad mini (2019) is better overall, but for a device built for casual use, the pricing does matter.

Further reading: iPad mini, iPad mini 2019 price, iPad mini 2019 price in India, iPad mini price, iPad mini price in India
Pranay Parab Email Pranay Pranay is in charge of podcasts and videos at Gadgets 360. Over the years, he has helped build the tutorials section of this site from the ground up, got the Guide section off the ground, started two podcasts, written several in-depth features, reviewed fitness gadgets, handled social media and most recently, taken charge of videos as well. He loves travelling, particularly to places not frequented by tourists. He keeps running half-marathons across the country and hopes to complete a full ...More
Motorola One Vision With Hole-Punch Display, 48-Megapixel Camera Tipped to Launch in Brazil on May 15
Apple Trade-Ins and Discounts Spark iPhone Revival