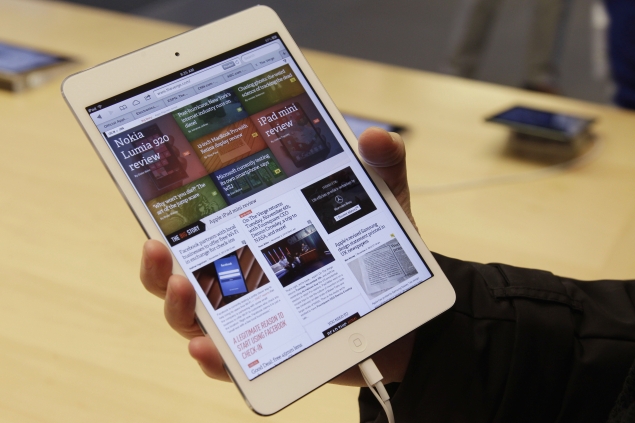 I bet the iPad mini is going to be on a lot of wish lists this holiday season. I also bet that for a lot of people, it's not going to be the best choice. It's beautiful and light, but Apple made a big compromise in the design, one that means that buyers should look closely at the competition before deciding.

Starting at $329, the iPad mini is the cheapest iPad. The screen is a third smaller than the regular iPads, and it sits in an exquisitely machined aluminum body. It weighs just 11 ounces half as much as a full-size iPad making it easier to hold in one hand. It's just under 8 inches long and less than a third of an inch thick, so it fits easily into a handbag.

The issue is the screen quality. Apple has been on the forefront of a move toward sharper, more colorful screens. It calls them "Retina" displays because the pixels the little light-emitting squares that make up the screen are so small that they blend together almost seamlessly in our eyes, removing the impression that we're watching a grid of discrete elements.

The iPad mini doesn't have a Retina screen. By the standards of last year, it's a good screen, with the same number of pixels as the first iPad and the iPad 2. The latest full-size iPad has four times as many pixels, and it really shows. By comparison, the iPad mini's screen looks coarse. It looks dull, too, because it doesn't have the same color-boosting technology that the full-size model has.

This is not an entirely fair comparison, as the full-size iPad starts at $499 and weighs twice as much. The real issue is that this year, there are other tablets that are cheaper than the iPad mini, weigh only slightly more and still have better screens.

Amazon.com Inc.'s Kindle Fire HD costs $199 and has about the same overall size as the mini. While the Kindle's screen is somewhat smaller (leaving a bigger frame around the edges), it is also sharper, with 30 percent more pixels than the mini. Colors are slightly brighter, too.

Barnes & Noble Inc.'s Nook HD costs $229 and has a screen that's even sharper than the Kindle HD's. It's got 65 percent more pixels than the iPad mini.

Sharper screens are darker, requiring a more powerful backlight to appear bright. That, in turn, would have forced an increase in the battery size. That's the reason the first iPad with a Retina display was thicker and heavier than the iPad 2. So to keep the iPad mini thin while matching the 10-hour battery life of the bigger iPads, Apple had to compromise on the display.

This can't last, though. By next year, it will likely be even more obvious that Apple is seriously behind in screen quality on its small tablet, and it will have to upgrade to a Retina display somehow. That means this first-generation iPad mini will look old pretty fast.

The display causes a few other problems, too. One is that when you run iPhone apps on the mini, it uses the coarsest version of the graphics for that app - the version designed for iPhones up to the 2009 model, the 3GS. You can blow the app up to fill more of the screen, but it looks pretty ugly. The full-size iPad uses the higher-quality Retina graphics when running iPhone apps, and it looks much better.

Some apps adapted for the iPad screen don't display that well on the mini screen, either, because of the smaller size. Buttons can be too small to hit accurately, bringing to mind Steve Jobs' 2010 comments about smaller tablets. The late Apple founder was of the vociferous opinion that the regular iPad was the smallest size that was also friendly to use.

In some apps, text on the mini is too small to be comfortably read - the section fronts in The New York Times and The Wall Street Journal apps are examples of this.

Of course, in some other respects, the iPad mini outdoes the Fire and the Nook, so it isn't just the tablet for the buyer who needs the prettiest and the thinnest. In particular, the Mini is a $329 entry ticket to the wonderful world of iPad and iPhone apps. For quality and quantity, it beats all the other app stores. (Oddly, there's an inverse relationship between screen quality and app availability in this category the Nook HD has the best screen and the fewest apps, while the second-best Kindle Fire HD has middling access to apps.)

In short, the iPad Mini is more versatile than the competition, and I'm sure it will please a lot of people. But take a look at the competition first, and figure that by next year, we'll see something from Apple that looks a lot better.