It only takes a few minutes playing with the iPad mini to realize the scaled-down tablet computer will be a sure-fire hit with longtime Apple disciples and potential converts who've been looking for a more affordable entree into the mobile computing market.

With a 7.9-inch screen, the iPad mini is perfectly sized to be stuffed in Christmas stockings. Recipients who will discover the pleasure and convenience of being able to take pictures, surf the Web, watch video, read books and listen to music on an exquisitely designed device that's pancake thin.

As enticing as that all sounds, the iPad mini also causes a dilemma, albeit a pleasant one.

The new option will make it even more difficult for holiday shoppers to figure out which mobile device to buy for their loved ones -or for themselves.

I felt the pangs of indecision within a few minutes of picking up the iPad mini for the first time.

As the company usually does at its product unveilings, Apple Inc. only provided reporters with limited, strictly supervised access to the iPad mini on Tuesday. That meant I could only experiment with it for about 15 minutes, but as an experienced user of the iPad 2, I could quickly see that the smaller tablet does just about everything its bigger brethren does.

Even though the mini's screen is 1.8 inches smaller than the standard iPad, the movie "The Avengers" looked lush, even in a side-by-side comparison with the larger tablet. When I pulled up the latest issue of the New Yorker, I didn't have to strain to see the text or pictures on the smaller screen. A quick check of other websites verified that the mini's screen isn't so tiny that it's going to cause a lot of squinting. After I took a very crisp picture of another reporter testing out a mini, I decided to email it to her to test how easy it was to use the keyboard on the smaller screen. No problem there. Best of all, the iPad Mini can be held in one hand and is about half the weight of the larger iPad. 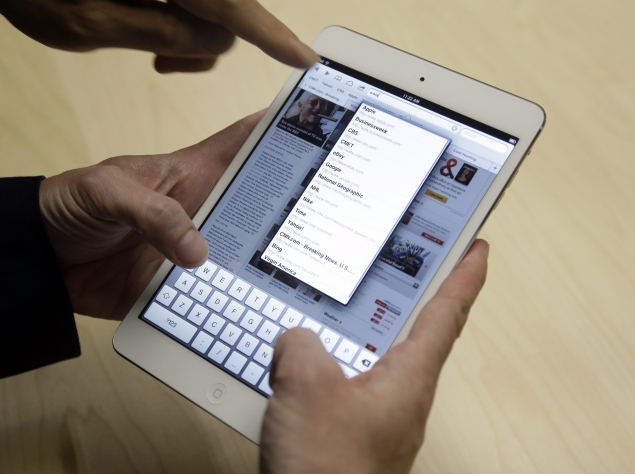 The Mini worked so much like my standard iPad that it immediately caused me to have second thoughts about a decision I thought I had already made. I like my iPad 2 a lot, but it's just too big to carry with me wherever I am. But there have been times I really wish I had it with me, like when I spot something that would make a great picture or when I've needed to check something on the Web. For various reasons, I didn't want a smartphone that would require a data plan, so I had my mind set on buying the latest iPod Touch, which has an iPhone-size screen and superb camera.

Now, the iPad mini has me vacillating. Apple isn't making it easier with its pricing strategy. The latest iPod Touch with 32 gigabytes sells for $299. An iPad Mini with 16 gigabytes of storage sells for $329. I'm tempted.

Like others who will no doubt be weighing the same decision, I'll have to make up my mind. Do I want something that can fit in my one of pant pockets like the Touch? For starters, it comes in more colors than the black-or-white Mini and offers more storage capacity for a cheaper price.

Or do I want to pay a little more for another tablet computer that can slip into a coat pocket and offer a richer experience with a screen nearly two times larger than the new Touch?

The iPad mini is so mighty that I can't believe the iPad 2 will be on the market too much longer. The iPad 2's $399 price now looks like too much, given that the iPad mini can do just about everything it does on a slightly smaller screen. The iPad 2 still may have some appeal for people who want a larger tablet at a lower price the newest iPads, but I can't see too many consumers buying Apple's second-generation tablet now that the mini is available.

Consumers who aren't set on buying one of Apple's devices will have even more choices to make. The iPad mini is clearly aimed at siphoning sales away from the Nexus 7 tablet that Google Inc. began selling four months ago and the longer-established Kindle Fire from Amazon.com Inc. Figuring out which one is best-suited for you (or that special someone on your shopping list) will likely come down to weighing price against performance.

Amazon is sells a Kindle Fire HD with 16 gigabytes of storage and 7-inch screen for $199 and a similarly sized Nexus 7 goes for $249. That means an iPad mini will cost $80 to $130 more, a price that Apple believes is justified because it boasts more features, such as front and back cameras. The mini's reliance on aluminum instead of plastic for its exterior also makes it look more stylish and more enjoyable to hold.

If the speculation on technology blogs pans out, Google might make things even more interesting and dizzying for holiday shoppers by introducing a $99 version of the Nexus 7 in the coming weeks.