Acer Iconia A1-713 Review: Too Little, Too Late

Acer's Iconia series of tablets has been in the market for some time and the Taiwanese manufacturer is not a stranger to this space. The latest to hit the retail shelves is the Iconia A1-713. The tablet costs around Rs. 13,000 and has a mediocre specifications list. However, its USP is its support for 3G data and voice calling. We try to find out if it is worthy as a tablet that can also make calls.

Look and feel
The Acer Iconia A1-713 looks like any other 7-inch Android tablet in the market today. The uninspired design doesn't attract too much attention.

The front is dominated by the 7-inch screen with thick borders on all sides. While the tablet is mostly made of plastic, Acer proudly advertises the metallic finish on the rear. It looks premium but the finish actually makes the rear slimy and we had to be extra careful not to drop the device. The Iconia A1-713 has dimensions of 193x116x8.95mm and weighs 305g.

Above the display are the front-facing camera, earpiece, a few sensors, and a notification LED. The Iconia A1-713 uses on-screen buttons for navigating through the operating system. The volume rocker and the power button sit on the right edge. The microphone and the Micro-USB port are on the bottom and there is a 3.5mm jack on top. On the bottom of the rear is the loudspeaker and on top is the protruding rear camera. The upper segment of the rear is removable, and reveals the SIM card and the microSD card slots. The cover is a thin strip of plastic that flexes easily and is very flimsy.

Specifications and software
Powering the tablet is a Mediatek MT8382 quad-core processor clocked at 1.3GHz with the older Mali-400MP GPU integrated. There is 1GB of RAM for running applications, and 16GB of internal storage which can be upgraded by a further 32GB using a microSD card.

The Acer A1-713 is a voice-calling tablet and accepts a single Mini-SIM card. It can connect to networks operating in the 850/900/1800/1900/2100MHz frequency bands, which includes 3G. The other connectivity options include Bluetooth 4.0 and Wi-Fi b/g/n. Also, there is a 2-megapixel rear camera and a VGA front-facing camera.

The 7-inch screen has a resolution of 1024x600 which translates to a pixel density of 169.5. This is probably the worst screen we've seen on a 7-inch tablet till date. Individual pixels can be discerned, text is fuzzy, and there is slight discolouration when viewed at an angle. Viewing angles and sunlight legibility are very poor too. Moreover, the screen is almost as reflective as a mirror.

The tablet runs Android 4.2 out of the box, but there an update to KitKat is readily available. Apart from a few changes to the lockscreen and icons, the update is not visually too different from Android Jelly Bean. Before the update, we could only unlock the device from the lockscreen, but after it , there were also shortcuts to the camera app and two of Acer's own apps - Photo and Remote Files. Both require the user to be connected to Acer Cloud for which the user needs to create an Acer ID. Just like the Nexus 7, the Acer A1-713 doesn't have tablet-specific software additions such as a multi-windowed mode.

However, Acer includes an app called Quick Mode when lets you switch between Basic, Senior and Default modes, which are simplified interfaces that borrow heavily from Windows Phone's style. In the basic mode, the user has quick access to six favourite contacts and a choice of three apps. Similarly, the Senior mode, which we presume is made for the elderly, provides direct access to a few relevant apps. You have to set a PIN code and use it every time you want to change any settings, which is frustrating but is meant to prevent people from inadvertently changing settings they don't understand. You can use this to lock down functions so the device can be given to children or unfamiliar users without worry. Apart from the Quick Mode app, there are a total of 17 third-party apps, most of which can be uninstalled. These are mostly non-intrusive and a few are in fact pretty useful.

Camera
It seems pretty clear to us that both, the 2-megapixel rear camera and the VGA front-facing camera, are mere add-ons and you would be better off forgetting they exist.

The rear camera doesn't have auto-focus. The captured images have smudged details and the colours are also slightly off. For those interested (we don't know why), it can also capture videos at a lowly 480p resolution. Take a look at the full resolution sample photograph captured by the rear camera to see for yourself. 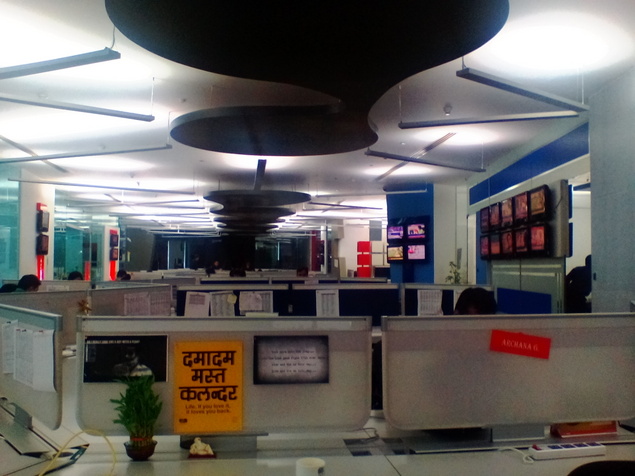 Performance
The Acer Iconia A1-713 is slow to boot, and there is a very slight but perceptible delay when the app drawer is opened. However, apps opened and closed quickly without any issue.

The benchmark numbers aren't great either. The Iconia A1-713 scored 15840 and 5755 in AnTuTu and Quadrant respectively. In the GFXbench test the Iconia A1-713 returned a score of 6.4fps and in the low-level 3DMark Ice Storm test it scored 2904. The tablet cannot play graphically intensive 3D games without lagging.

We played a few videos encoded at different resolutions. The heavily encoded 1080p video stuttered badly. Moreover, the screen's quality made watching it it a bad experience. The loudspeaker is adequately loud for a tablet. There are no bundled earphones but with our reference headset we found that the sound quality was decent. The phone had absolutely no problem in connecting to a 3G network and the connection was pretty solid throughout our journey in a Mumbai local. In our video loop test for battery life, the tablet lasted us 7 hours, 7 minutes. This is normal by tablet standards.

Verdict
Priced at Rs. 12,999, the Acer A1-713 is characterised by sluggish performance, a terrible screen and unexciting software. Those wanting a great tablet experience are bound to be disappointed. The only redeeming factor is its solid voice-calling capability. All things considered, we think the Asus Fonepad 7 Dual SIM (Review | Pictures), Flipkart Digiflip Pro XT712 (Review | Pictures) and HP Slate 7 are much better options. More importantly, they are cheaper. We might have been okay with this tablet if it had been priced below Rs. 10,000.