Xiaomi MiPad 2 With Intel SoC Tipped to Launch on Wednesday

While Xiaomi on Monday celebrated its 5-year anniversary, it also hinted at a new device launch in the market on Wednesday, the day of its Mi Fan Festival. Apart from a tweet indicating something will be launched on the day, a teaser image is also doing the rounds of the Internet.

The teaser image, showcasing two jacks (playing cards), was procured by Chinese blog MyDrivers, points to the launch of new device on Wednesday. As Xiaomi has recently launched new versions of almost all its products, with the sole exception of the Xiaomi MiPad, the company is expected to launch its successor - the MiPad 2. Expected to launch on April 8, the website also tips some purported specifications of the as-yet-unannounced tablet.

According to My Drivers, the tablet is likely to retain 7.9-inch display of its predecessor, but be powered by an Intel SoC instead of Nvidia's Tegra K1. The unannounced MiPad 2 is said to equip 2GB of RAM and 16GB of inbuilt storage. Previous MiPad 2 leaks had tipped a metal body and glass back. 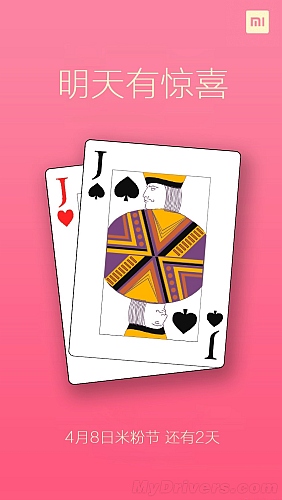 The Chinese smartphone manufacturer last month unveiled a more affordable variant of the Redmi 2, the Redmi 2A alongside the Mi Note (Pink Edition), on the occasion of its fifth anniversary. The Xiaomi Redmi 2A was launched at CNY 599 (approximately Rs. 6,000) and will be available at a special price of CNY 499 (approximately Rs. 5,000) on April 8 in China. The Xiaomi Mi Note (Pink Edition), on the other hand, has been priced at CNY 2,499 (approximately Rs. 25,000), which is slightly more than the original Mi Note that was launched at CNY 2,299 (roughly Rs. 23,000) for the 16GB model.