Windows 8.1 will use compression to fit on 16GB devices 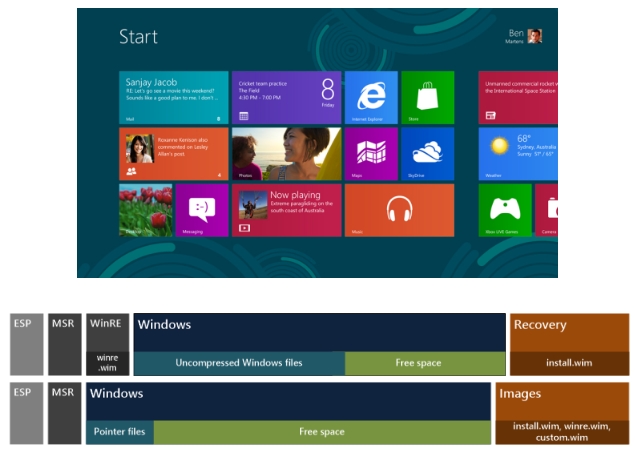 Microsoft is taking a number of steps to make Windows 8.1 run smoothly on low-powered, low-cost devices, especially tablets with small screens. One criticism so far has been the amount of space Windows consumes on a device's hard drive or SSD, but Microsoft has developed a way to reduce that number rather aggressively.

Low-end devices typically have 1GB of RAM and 16GB of physical storage space, and that's the target Microsoft set for itself in order to compete with Android tablets. On a typical device, Windows 8.1 itself can take up to 9GB of space, leaving users with next to nothing left for installing software and saving files. However, Windows 8.1 with the recently released Update 1 can be made to occupy less than 4GB of space.

While the small footprint was announced with the release of Update 1, Microsoft has recently published a blog post and support documents describing the technique in more detail. "WIMBoot", or Windows Image Boot, uses a highly compressed version of the usual Windows file and folder structure, which resides in its own disk partition similar to the recovery partition on many devices. Users will still see a Windows folder, although entries in it are pointers to specific locations within the compressed partition, rather than the files themselves.

Users of existing Windows 8 or 8.1 devices will not be able to implement WIMBoot while updating, since it requires a fresh installation. Microsoft stresses that this is not a separate edition of Windows (like the Starter editions used to be), but is simply a new way of installing it.

There will be a slight performance hit due to the need to compress and decompress data on demand. WIMBoot requires solid-state storage, which allow for much faster non-sequential read and write speeds than traditional spinning hard drives. Devices must use either SSD or eMMC storage. Neither hard drives nor hybrids which combine spinning and solid-state tech are supported. Microsoft also warns that some backup, encryption and antivirus programs will encounter errors.

A modern UEFI (Unified Extensible Firmware Interface) BIOS is required to implement WIMBoot, but this is already a requirement for Windows 8 certification. New tablets with WIMBoot will launch soon, but system administrators can also create images for deployment to existing machines, including customised apps, drivers and branding.