Microsoft has been dominating tech circles owing much to the highly anticipated release of its new operating system, Windows 8. While companies like Acer have announced Windows 8 tablets at the Computex trade fair this year, fresh details of a leaked Lenovo Windows 8 ThinkPad Tablet 2 have surfaced online.

The details revealed comparison between Lenovo's ThinkPad Tablet 2 and Apple's iPad. but we all know that the real competition is Microsoft's Surface tablet based on the same operating system.

As far as specs are concerned, the ThinkPadTablet  2 will feature a 10.1-inch, 1366x768 IPS display. Under the hood, the tablet will be powered by a dual-core Intel Clover Trail processor hosting 2GB RAM with 64GB storage. 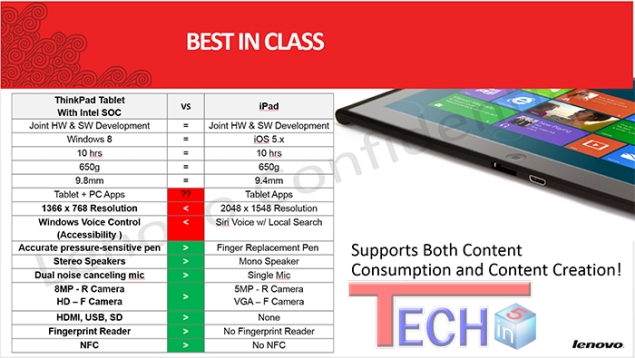 The tablet will expectedly claims a battery life of 10 hours, features an HD front facing 2MP camera and an 8MP rear camera (both with LED flash), built-in speakers, LTE / HSPA+ connectivity and NFC capabilities as well. The 9.8mm tablet targeted primarily at business users, will also come with a Lenovo-styled keyboard dock, a pen stylus and a fingerprint reader too.

There is still no official word regrading the pricing or availability for the ThinkPad Tablet 2. But it looks like that Lenovo will raise the covers just in time with Windows 8 set to debut on October 26 2012.

What will Apple, Google and Microsoft do with their cash hordes?
India's telephone subscriber base crosses 951 million