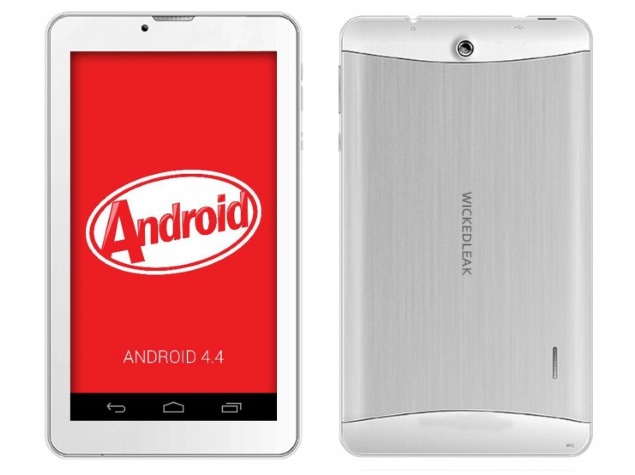 Wickedleak has launched a new budget tablet, the Wammy Desire 3, priced at Rs. 5,990. The Wickedleak Wammy Desire 3 tablet comes with voice-calling feature, 3G support, and runs Android KitKat - some of the highlights of the tablet at this price point.

The company has announced that the tablet will be exclusively available from its official store.

The budget voice-calling tablet segment has seen some launches in recent times and the new tablet from Wickedleak will be competing against tablets from domestic brands such as Kobian, which launched the Mercury mTab Star M830G tablet, at Rs. 6,999, and Swipe Telecom that launched its Swipe Slice tablet at Rs. 4,999.

In terms of specifications, the Wickedleak Wammy Desire 3 tablet comes with dual-SIM support (GSM+GSM) and offers voice calling functionality. It bears a 7-inch (1024x600 pixels) IPS display and is powered by a 1.3GHz quad-core MediaTek MT8389 processor with 1GB of RAM and Mali 400 GPU. There is 8GB of inbuilt storage, which is further expandable via microSD card (up to 32GB). The Wammy Desire 3 sports a 2-megapixel rear camera, while there is a secondary 0.3-megapixel front-facing camera also onboard.

Apart from 3G support, the tablet includes Wi-Fi, Micro-USB, GPS/ A-GPS, GPRS/ EDGE, and Bluetooth connectivity options. The tablet packs a 3000mAh battery, which can deliver up to 5 hours of talk time and up to 168 hours of standby time, according to the company.

Commenting on the launch, Aditya Mehta, CEO, Wickedleak said, "We are extremely happy and proud to launch Wickedleak Wammy Desire 3. We are targeting the masses by launching the tablet at a very affordable price. Gaming and watching videos will be a new experience for users with Wammy Desire 3."