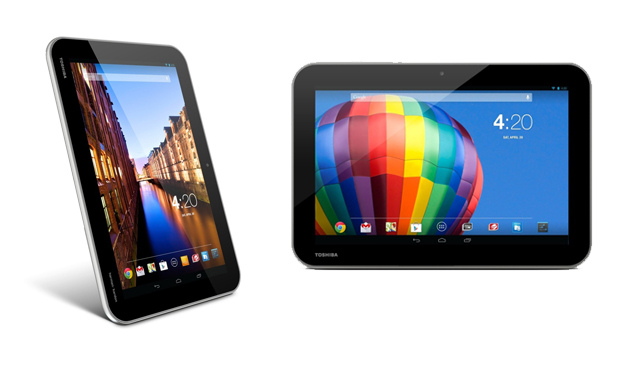 Toshiba has launched three new Android tablets in its Excite line up. The three 10.1-inch tablets namely the Excite Pure, Excite Pro and Excite Write are priced at $299, $499, and $599, respectively. Toshiba is also offering an optional keyboard dock that supports all three of them. The Excite Pro and Excite Write will be amongst the first tablets powered by Nvidia's Tegra 4 processor to enter the market.The three devices look the same but yet each has something specific to offer.

Excite Pure
Excite Pure comes with a $299 price tag and offers a pure Android experience sans the external skins. The tablet sports a 1280x800 resolution display and is powered by Nvidia Tegra 3 processor. It has a 1.2-megapixel front-facing camera but no rear camera. The device runs on Android 4.2.2 and offers 16GB of storage. The storage on the tablet can be expanded through a microSD card slot. The device offers connectivity through Micro-HDMI and Micro-USB.

Excite Pro
With looks similar to the other two, the Excite Pro is supposed to be a premium Android tablet. It runs Nvidia's new Tegra 4 processor and Android Jelly Bean. With a resolution of 2560x1600 the device comes with a 10.1-inch display. The device has an 8-megapixel rear camera and 1.3-megapixel. It comes in a 32GB storage variant and sports dual Harman Kardon speakers. The tablet offers Micro-HDMI, Micro-USB, and microSD ports. It would be competing with the recently launched ASUS Transformer Pad Infinity tablet that offers similar specifications but with a better set of looks.

Excite Write
With specifications similar to the Excite Pro, the Excite Write like the name suggests lets you 'write' with the Wacom digitizer that comes with the tablet. The writing abilities of the 10.1-inch tablet make it a direct competitor to the Samsung Galaxy Note 10.1. However, when compared to the Note series that has software that supports the S-Pen functionalities, the Excite Write might not turn out to be so exciting. The tablet currently comes with only one app to make full use of the stylus, Toshiba's own TruNote note-taking app. Another missing point on the Write is that unlike the Samsung Galaxy Note there is no slot for the stylus in the tablet.
Comments