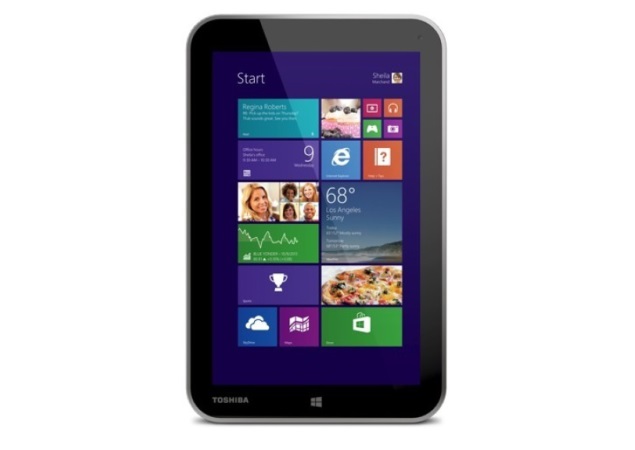 Toshiba the company which is usually more active in the laptop segment has launched a new tablet, the Toshiba Encore.

The Toshiba Encore comes with an 8-inch HFFS multi-touch display (1280x800 pixels). The tablet weighs about 479 grams. It is powered by an Intel Bay Trail Atom processor. The company says that the Encore has been developed in close collaboration with Microsoft and has been optimized for Windows 8.1. It is also compatible with both Windows 8 apps (Modern UI apps) and legacy Windows programs. It sports an 8-megapixel rear camera and a 2-megapixel front-facing camera. The tablet is equipped with dual-microphones and is optimized for Skype.

The Toshiba Encore includes 2GB of RAM and there is 32GB of internal storage which can be further expanded up to 32GB with the help of a microSD card. Connectivity options on the tablet include a Micro-USB port, Micro-HDMI port and Wi-Fi. The tablet comes preloaded with the full version of Microsoft Office Home & Student 2013 and Xbox SmartGlass app that turns the device into a secondary screen for the Xbox 360 and Xbox One gaming consoles.

Commenting on the launch Carl Pinto, vice president of marketing, Toshiba America Information Systems, Inc., Digital Products Division said, "Encore is poised to re-energize the opportunity for Windows tablets in the market. Our fundamental approach to designing Encore was to create a better convergence of hardware and software so the overall app experience and capabilities on a Windows-based device is better than ever. Windows has a lot to offer for a tablet user, and with the new features that Windows 8.1 brings, we believe that Encore will deliver more choice against a range of competitive tablets."

The Toshiba Encore tablet will hit the market shelves in November and will come with a price tag of $329.99.

Earlier, Acer launched the Iconia W3 which was the first Windows 8 tablet to come with an 8.1-inch screen.