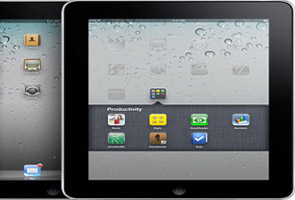 Highlights
Apple Inc has started manufacturing a "thinner and lighter" version of its iPad tablet computer that will also have a built-in front-facing camera and faster processor.

The new version of the iPad will have a camera on the front of the device for features like video-conferencing, the Wall Street Journal quoted people familiar with the matter as
saying.

"The new iPad will be thinner and lighter than the first model," the report added.

It will also have more memory and a more powerful graphics processor.

The new iPad would initially be available through carriers Verizon Wireless and AT&T Inc in the US.

"The production of the new iPad shows how Apple is moving forward in the wake of Chief Executive Steve Jobs's disclosure last month that he was taking a medical leave for an
unspecified ailment," the Journal said.

The report further said the one feature in the new iPad that may "disappoint" consumers will be the lack of significant improvement in the resolution of the device's display.

"Apple has had trouble improving the display technology, in part because of the iPad screen's larger size compared with the iPhone," it quoted people familiar with the situation as saying.

The new iPad could debut in the next couple of months, the report added.

Like many of Apple's other products, Hon Hai Precision Industry Co, better known by its trade name Foxconn, is assembling the new iPad, the people familiar with the matter
said.

Apple has sold 14.8 million units of the iPad since the tablet's debut last April.

The tablet contributed USD 4.6 billion in sales, or 17 per cent of the company's overall revenue in Apple's December quarter.

Aiming to tap into the growing and lucrative market for tablets, companies like Samsung, Motorola, RIM and Dell are also launching their own tablet computers.

How the Huffington Post became a $315 mn killer app
Shahid Balwa: I am being singled out