The iPad 2 has been a boon to eBay 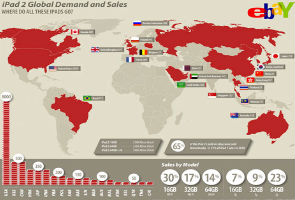 Highlights
The Apple iPad 2, which is still very difficult to acquire at Apple retail stores, is creating a robust and healthy resale market online.

EBay, the online marketplace, released numbers and an info graphic on Thursday showing just how popular the iPad 2 had become on its Web site.

The company said that 65 percent of iPad 2s sold on eBay were purchased by buyers in the United States. In 2010, only 35 percent of sales of the first generation iPad were sold domestically on the online marketplace. The higher numbers in the United States this time illustrates just how difficult it is to acquire the new tablet through traditional retail stores. Apple stores continually sell out of the new tablet, and the wait to get one purchased online is still five weeks.

Although the majority of sales on eBay have taken place in the United States, people living in Russia, Canada, Hong Kong, Japan and Britain have also purchased a large number of iPad 2s.

The most sought-after models of the iPad 2 are on the low and high end. The basic 16-gigabyte Wi-fi-only version and the 64-gigabyte with 3G data connection account for a majority of iPad 2 sales on eBay. They also net a healthy profit for sellers. EBay said that the low-end iPad 2 was selling for $198 over the $500 retail price and the $830 high-end model was selling for an astounding $406 more.

The least desired iPad 2 is the 16-gigabyte 3G model, making up only 7 percent of iPad 2 sales.

The first-generation iPad is still selling well online too. As I've written in the past, many buyers are still hoping to find deals on the first iPad, which is selling for $200 less than the original price in online marketplaces.
Comments