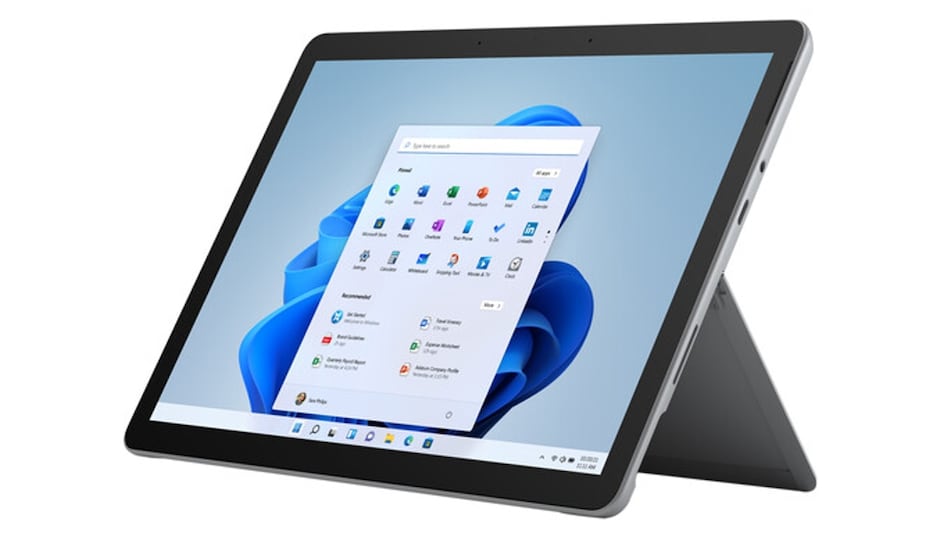 Microsoft Surface Go 3 debuted in the US in September

Surface Go 3 was launched in India on Wednesday as Microsoft's first device to come preloaded with Windows 11. The new Surface Go model was unveiled alongside the Surface Laptop Studio, Surface Pro 8, and Surface Duo 2 in September. As an upgrade to the existing Surface Go 2, the Surface Go 3 is rated to deliver 60 percent faster performance through the 10th-generation Intel Core i3 processor. The tablet, however, also has an Intel Pentium Gold option for its base variant. The Surface Go 3 shares the same design language of the Surface Go 2. It comes with a 3:2 display and features 1080p cameras on both front and back sides.

Surface Go 3 price in India has been set at Rs. 57,999 for the configuration which includes a 10th-generation Intel Pentium Gold processor, 8GB RAM, and 128GB SSD. The tablet is available for pre-orders in the country through Amazon, and pre-ordering customers will get a complimentary Surface Pen worth Rs. 9,699. It will be generally available from the e-commerce site from November 23.

Hardware-wise, Microsoft Surface Go 3 is quite similar to the Surface Go 2. It has a 10.5-inch touch display with a 3:2 aspect ratio. The tablet also comes with 1080p cameras on the front and back and is equipped with Dolby Audio sound technology. Further, there are studio microphones for an enhanced video chatting experience.

Microsoft has preloaded Windows 11 on the Surface Go 3 to provide its latest software experience. The tablet can also be directly deployed to employees using Windows Autopilot.

This week on Orbital, the Gadgets 360 podcast, we discuss the Surface Pro 8, Go 3, Duo 2, and Laptop Studio — as Microsoft sets a vision for Windows 11 hardware. Orbital is available on Spotify, Gaana, JioSaavn, Google Podcasts, Apple Podcasts, Amazon Music and wherever you get your podcasts.
Affiliate links may be automatically generated - see our ethics statement for details.