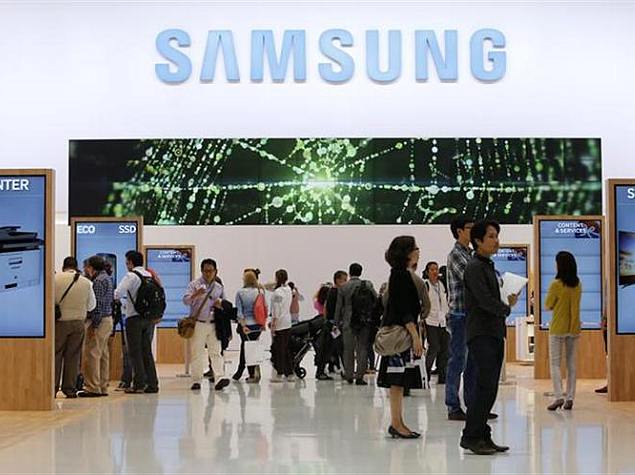 Samsung Electronics Co Ltd pledged to double its dividend yield, invest in new technology and boost marketing to topple Apple Inc in the mobile sector as it sought to ease investors' concerns over its sagging share price.

The world's leading maker of smartphones, memory chips and televisions outlined its strategy on Wednesday at a rare meeting with analysts designed to reassure investors that it is listening to complaints about low returns and poor use of capital.

But shareholders appeared unconvinced as they drove the stock more than 2 percent lower, versus a 0.1 percent rise in the wider market. Samsung trades at seven times projected earnings, while Apple trades at a premium of 12.

"Investors had expected a bag of presents from today's meeting but its dividend payout plan is disappointing," said Kim Sung-soo, a fund manager at LS Asset Management.

The second analyst meeting of its kind in eight years came after a string of record quarterly profits, which have fed a cash pile totalling $50 billion as of September without arresting a 4.7 percent slide in the share price this year.

Shareholder returns are at their lowest in five years, with investors getting just 5.1 percent of profit in 2012 compared with a 15.8 percent total shareholder return in 2007 when Samsung last bought back shares in the market.

"Our management view is that our product valuation multiple does not truly reflect our earnings growth and leadership position in the IT industry," Chief Financial Officer Lee Sang-hoon told analysts at the meeting in Seoul.

He said the South Korean giant would modify its dividend strategy based on a target yield, and flagged a more flexible approach to shareholder returns by vowing to review them every three years to ensure they reflected changes in business conditions.

Rather than specify a target dividend yield, he said the 2013 payout would be around 1 percent of the share price compared with 0.5 percent last year, a level that fueled investors' complaints that the company was hoarding cash at their expense.

Lee said the $50 billion war chest was being prepared for "significant investment" in strategic technologies, mergers or acquisitions, suggesting the company could loosen its purse strings as it chases the next big thing in mobile technology.

"I know we have been somewhat conservative in M&A but it may be different in the future. Based on this, I don't believe the current level of net cash balance is excessive," he said.

"We plan to allocate a significant portion of our annual cash flow into capex and R&D to secure future growth and shareholder return," he said.

Eyes on tablets
Faced with slowing growth in the market for its top-selling Galaxy range of high-end smartphones, Samsung said it would target the tablet segment where Apple's iPads dominate.

"Our tablet sales significantly increased already this year. So we are ready for the next step," said J.K. Shin, co-chief executive and head of Samsung's mobile business.

The mobile business brings in two thirds of Samsung's total profit, and Shin said the $228 billion company would continue to invest heavily in marketing to create "buzz" and boost sales of its latest gadgets.

"We have technologies ready to bring new innovation into the market soon. At the same time, we'll leverage our Galaxy brand, distribution channel and global networks," he said.

Shin said Samsung would expand its mobile "experience shops", hold more global events like the launch of its Galaxy S4 smartphone at Manhattan's iconic Radio City Music Hall in March, and try out new marketing formats such as collaboration with fashion shows.

Assuming conservatively that Samsung will keep its marketing budget stable at last year's 6.5 percent of sales, outlays are expected to increase 16 percent to a staggering $14.2 billion this year, on par with its R&D spending.

CFO Lee estimated R&D spending would be around $14 billion.