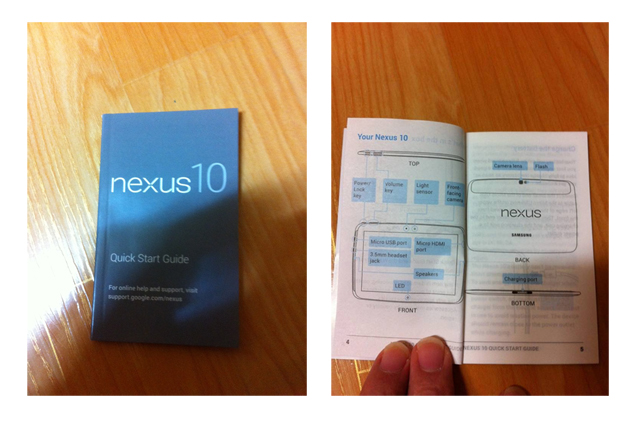 We've been hearing about Samsung's 10-inch Nexus tablet, codenamed "Manta",  that is expected to make an appearance at next week's Google Android event. In a latest set of leaks, a manual for the Samsung Nexus 10 have been spotted online on Korean forum Seeko.

While one of the images shows the front cover of the manual with "nexus 10" written on it, the other shows the inside of the manual with sketches of various ports and buttons on the tablet. These include Micro-USB, Micro HDMI, charging ports and power/ lock key, volume key, front facing and rear cameras amongst a few.

The tablet seems to sport a curved design with the "nexus" and "Samsung" branding on the back panel. Well it's hard to say whether the tablet looks more like the Nexus 7 or will it inherit a similar design from the Samsung Galaxy Note 10.1.

Earlier rumoured specs for the 10-inch tablet from Samsung suggest that it will feature a 2560×1600 pixel (16:10) resolution, translating into 300 ppi, outshining the new iPad's pixel density (264 ppi), with no details on pricing or other hardware specs currently known. As far as the OS is concerned, it is likely to run on Android 4.2 (currently codenamed Key Lime Pie).

The information in the manual is too limited to arrive at any conclusion as of now. But we expect to see more details of the Samsung Nexus 10 at Google's upcoming event in New York on October 29. The search giant is also likely to announce the 3G Nexus 7 along with a 32GB version of its popular tablet as well as the LG Nexus 4, the next Nexus smartphone.
Comments