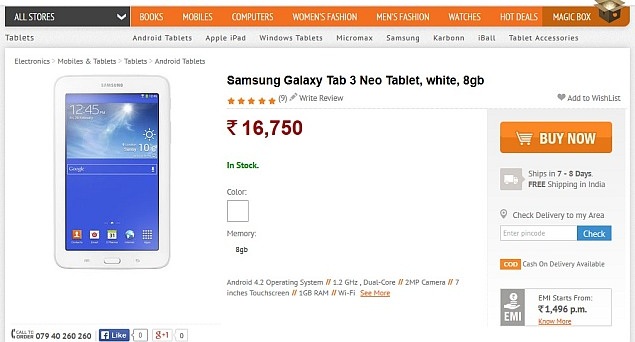 Samsung's much talked about tablet, the Galaxy Tab3 Neo (also known as Tab 3 Lite), is now available via an online retailer in India at Rs. 16,750. The tablet has not yet been listed on the company's online India store.

The Samsung Galaxy Tab3 Neo's Wi-Fi only White variant with 8GB inbuilt storage is currently available via the online retailer. According to reports, the tablet is also already available in retail stores. Samsung has still not detailed the India availability or pricing of the 3G model.

It runs Android 4.2 Jelly Bean OS out-of-the-box with TouchWiz UI on top. It features a 7-inch WSVGA (600x1024 pixels) display, and is powered by a 1.2GHz dual-core processor alongside 1GB of RAM. It comes with 8GB inbuilt storage, which is further expandable up to 32GB with the help of a microSD card. The Galaxy Tab3 Neo sports a 2-megapixel rear camera with no front-facing shooter. Backed by a 3600mAh battery, the tablet measures 193.4x116.4x9.7mm dimensions and weighs 310 grams.

Connectivity options on the Galaxy Tab3 Neo tablet include Wi-Fi, Wi-Fi Direct, Bluetooth, Micro-USB, GPS/ AGPS, GLONASS and 3G (for the variant not available as yet).

The Samsung Galaxy Tab3 Neo has been listed on Infibeam.