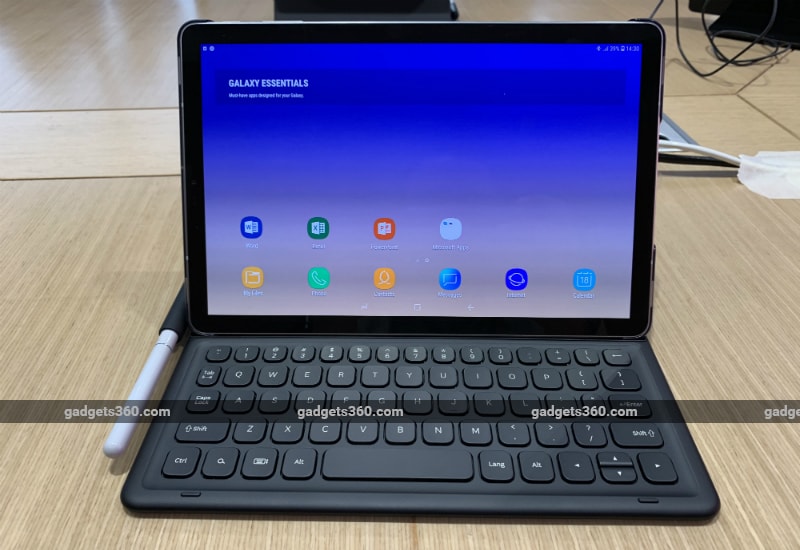 Samsung Galaxy Tab S4 was launched in India at an event in Gurugram on Thursday. The tablet that was unveiled back in August comes with Samsung DeX and redefined S Pen integration. It also has an optional Book Cover Keyboard that enables a notebook-like experience. The Galaxy Tab S4 includes AKG-tuned speakers and Dolby Atmos sound as well as features a 10.5-inch Super AMOLED display. Samsung has provided a proprietary Dual mode on the tablet that enhances multitasking. Further, there is Samsung Knox integration that is claimed to offer defence-grade mobile security. Notably, the LTE variant has been launched in India, and not the Wi-Fi only variant.

The Samsung Galaxy Tab S4 price in India has been set at Rs. 57,900. The tablet in Black and Grey colour options will go on sale through Samsung Online Shop as well as leading offline retail stores in the country. Further, it will be available online exclusively through Amazon.in starting October 20. As an introductory offer, Samsung is offering a Rs. 5,000 cashback on HDFC Bank credit cards and EMI options on HDFC Bank debit cards. The tablet also comes with an instant Jio cashback worth Rs. 2,750 that will be available on recharging with Rs. 198 and Rs. 299 plans. Customers availing the Jio cashback will also get double data benefits on every recharge for the next four recharges.

Samsung is also separately selling the Keyboard Book Cover for the Galaxy Tab S4 at Rs. 7,499, while its simple Book Cover can be purchased at Rs. 3,999 and a POGO Charging Dock is available at Rs. 3,499.

The presence of Samsung DeX on the Galaxy Tab S4 enables desktop-like computing and offers users a way to open multiple desktop-style windows for Android apps, including the Microsoft Office suite. There is also an option to drag and drop content between apps and use keyboard shortcuts and commands using the optional Book Cover Keyboard. This works similar to a Windows-based notebook. Also, the bundled S Pen comes 4,096 pressure levels and a pen tip of 0.7mm diameter. There is Samsung Knox to protect the experience from malicious access, while Samsung Flow enables users to manage all their compatible devices by connecting and transferring files, tasks, and notifications seamlessly. Furthermore, there is a Daily Board app that provides an everyday information such as the weather, calendar, and time on a single screen.

As a successor to the Galaxy Tab S3 that was launched last year, the Samsung Galaxy Tab S4 runs Android 8.1 Oreo along with Samsung Experience UX on top and features a larger, 10.5-inch WQXGA (2560x1600 pixels) Super AMOLED display along with a 16:10 aspect ratio and 287ppi pixel density. Under the hood, there is an octa-core Qualcomm Snapdragon 835 SoC, coupled with 4GB of RAM. The tablet has a 13-megapixel autofocus camera at the back along with an LED flash and an 8-megapixel camera the front. Both cameras have an f/1.9 aperture lens.

On the storage part, the Samsung Galaxy Tab S4 in India has 64GB of onboard storage that is expandable via microSD card (up to 400GB). The tablet has 4G LTE support, Wi-Fi 802.11ac along with Wi-Fi Direct, MIMO, Bluetooth v5.0, GPS/ A-GPS, USB Type-C, and a POGO connector. The tablet has four onboard speakers that all are tuned by AKG and use Dolby Atmos technology. Sensors onboard include an accelerometer, compass, gyroscope, hall sensor, iris scanner, proximity sensor, and an RGB sensor. Moreover, the Galaxy Tab S4 has a 7,300mAh battery that is claimed to support fast charging and measures 249.3x164.3x7.1mm.

Call of Duty: Black Ops 4 PS4 vs PS4 Pro vs Xbox One X vs Xbox One S: Which Version Should You Buy?
Cortana Version 3.0 With UI Tweaks, New Utility Features Out in Beta for Android, iOS Users