Samsung, after launching several smartphones in the past few months, including the flagship Galaxy S6 and Galaxy S6 Edge, has quietly launched three new tablets in Malaysia and Russia. While the new Galaxy Tab A series includes two models of different screen sizes, the third tablet falls under the existing Galaxy Tab 3 family.

It is worth mentioning that both the Samsung Galaxy Tab A tablets (seen above) are the first ones by the South Korean tech firm to feature a 4:3 screen aspect ratio. Besides the battery and screen size, both models feature the same specifications. The Galaxy Tab A models, as mentioned by Sammobile, include a low screen resolution of 1024x768 pixels, which result in 160ppi and 132ppi pixel density on 8-inch and 9.7-inch models respectively. Also, the tablets flaunt the latest version of Samsung TouchWiz based on Android 5.0 Lollipop.

The Galaxy Tab A tablets are powered by a 1.2GHz quad-core processor, which is likely to be the Qualcomm Snapdragon 410 chipset, coupled with 2GB of RAM. Also, the 16GB of inbuilt storage is expandable via microSD card (up to 128GB). Both additionally feature a 5-megapixel rear camera without flash and a 2-megapixel front-facing camera for video chatting.

As for the battery, the 8-inch Samsung Galaxy Tab A tablet is backed by a 4200mAh battery, while the larger screen variant houses a 6000mAh battery. The 9.7-inch Galaxy Tab A model also features a dual speaker arrangement. The tablets sport a metalllic-looking rear panel and are 7.5mm thin. 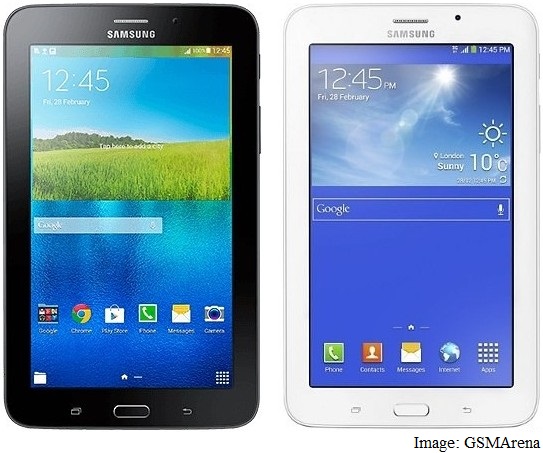 The third tablet, the Samsung Galaxy Tab 3 V (seen above), which has been launched in Malaysia, and runs on Android 4.4 KitKat. It features a 7-inch WSVGA (1024x600 pixels) LCD display with 16:9 screen ratio.

The entry-level tablet is powered by a 1.3GHz quad-core Spreadtrum chipset, coupled with 1GB of RAM. The built-in storage is 8GB, which is expandable via microSD card (up to 32GB ). With 2-megapixel rear and front-facing cameras, the Samsung Galaxy Tab 3 V houses a 3600mAh battery.

While HardwareZone website, which first spotted the tablets, mentions the Galaxy Tab 3 V to feature 3G connectivity, GSMArena claims the model to come in both LTE-enabled version and Wi-Fi version. Samsung has yet to confirm the variants. Design-wise, the Galaxy Tab 3 V sports a similar profile to other Galaxy Tab 3 tablets with a plastic build.