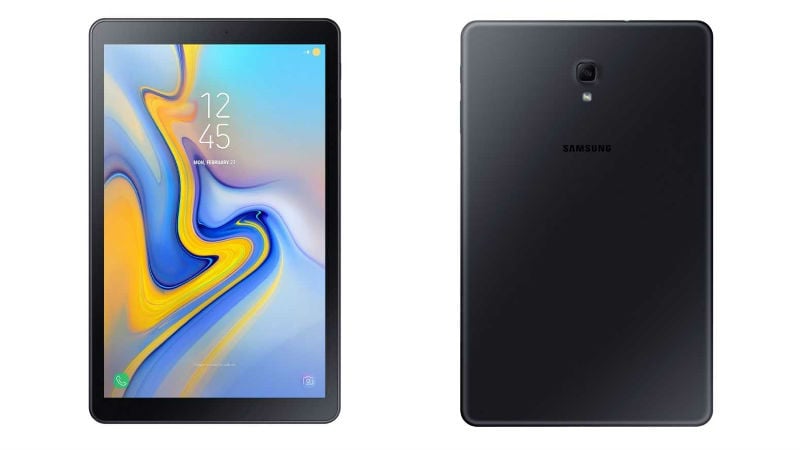 Samsung Galaxy Tab A 10.5 was launched in India on Wednesday. The tablet with a 10.5-inch display was first unveiled by Samsung in the US earlier this month, and now it has made its way to India. The new Galaxy Tab A variant features a large display with a 76.3 percent screen-to-body ratio. The key features of the tablet include quad speakers powered by Dolby Atmos, 7300mAh battery that promises up to 14.5 hours of video playback, and LTE support - the company has brought only the 4G variant to India, foregoing the Wi-Fi only model. The tablet comes preloaded with Samsung's SmartThings app to let users remotely control their connected devices and monitor their smart homes. The price in India of the Galaxy Tab A 10.5 has been set at Rs. 29,990 and it will go on sale next week.

As mentioned, the Samsung Galaxy Tab A 10.5 has been launched in India priced at Rs. 29,990. It will be available in the country starting August 13. It comes in Ebony Black and Urban Blue colour variants. Interested buyers will be able to purchase the tablet via Samsung Online Shop and Flipkart. It will also be available via offline retail stores. Notably, you can pre-book the Galaxy Tab A 10.5 on Flipkart starting August 9.

Reliance Jio users who buy the Samsung Galaxy Tab A 10.5, will get an instant cashback of Rs. 2,750 on recharging with Rs. 198 or Rs. 299 plan. Additionally, buyers will also get double data benefits on every recharge for the next 4 recharges.

The Samsung Galaxy Tab A 10.5 runs Android 8.1 Oreo along with Samsung Experience UX on top. It sports a 10.5-inch display with a 16:10 aspect ratio. The display panel is a TFT LCD one that comes in WUXGA (1920x1200 pixels) resolution. The tablet is powered by an octa-core Qualcomm Snapdragon 450 SoC, coupled with 3GB of RAM. It has an 8-megapixel autofocus sensor at the back along with an LED flash module and a 5-megapixel sensor at front.

Notably, the Samsung Galaxy Tab A 10.5 neither has Samsung DeX support nor an S Pen integration. The tablet instead comes preloaded with kids-focused content, including a Kids Mode, Kids Browser, Galaxy Apps for Kids, and eight free child-friendly apps. There is also a Multi-User Mode that lets users create a separate account for their kids. For on-the-go entertainment, the tablet has four speakers - powered by Dolby Atmos.

For storing content, the Galaxy Tab A 10.5 has 32GB of onboard storage that is expandable via microSD card (up to 400GB). The tablet has 4G LTE, Wi-Fi 802.11 a/b/g/n/ac along with Wi-Fi Direct, Bluetooth v4.2, GPS+GLONASS, and USB Type-C. Sensors on board include an accelerometer, compass, gyroscope, RGB, and a hall sensor. The tablet packs a 7300mAh battery and measures 260x161.1x8mm.