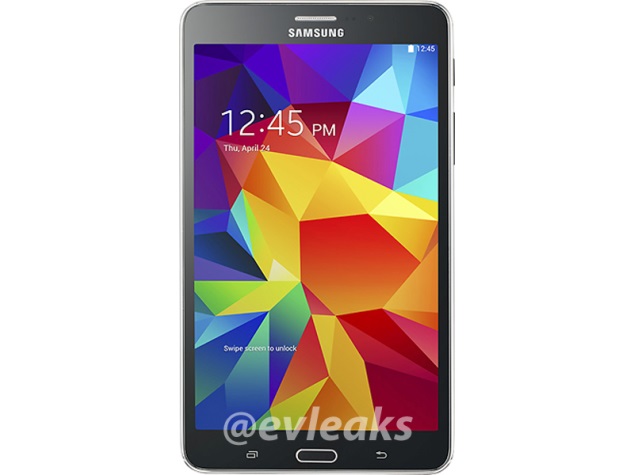 Samsung has been long rumoured to be working on the Galaxy Tab 4 tablet series and it looks like the company is all set to launch the first device in the line-up.

Popular phone and tablet tipster, @evleaks, has posted a couple of images of the yet-to-be-launched Galaxy Tab 4 7.0 tablet in Black and White colour options.

The tweet by @evleaks reads, "Samsung Galaxy Tab 4 7.0" and hints what Samsung might call the tablet officially. Notably, the leaked press renders show the alleged Galaxy Tab 4 7.0's front panel and side profiles. The device in the images looks like a blown-up version of the Samsung Galaxy S5.

One of the leaked imagesof the alleged Galaxy Tab 4 7.0 also show power and volume rocker buttons placed on the right panel of the device, alongside the microSD card or a SIM card slot. The rumoured Galaxy Tab 4 7.0 includes home button on the front panel, very similar to Samsung's Galaxy smartphones and tablets. No pricing and availability details for the alleged tablets have been disclosed as of yet.

The yet-to-be-announced Samsung Galaxy Tab 4 (7.0), thought codenamed Degas, is said to sport a TFT LCD display, instead of the AMOLED one. The tablet is expected to come with 1GB of RAM. The camera options on the tablet include a 3-megapixel rear and 1.3-megapixel front-facing cameras. The device is said to arrive with 8GB of built-in storage, which can be expanded up to 64GB via microSD card. The Galaxy 4 (7.0) is expected to be backed up by a 4450mAh battery, and measure 106 x 187 x8.9mm in dimensions.