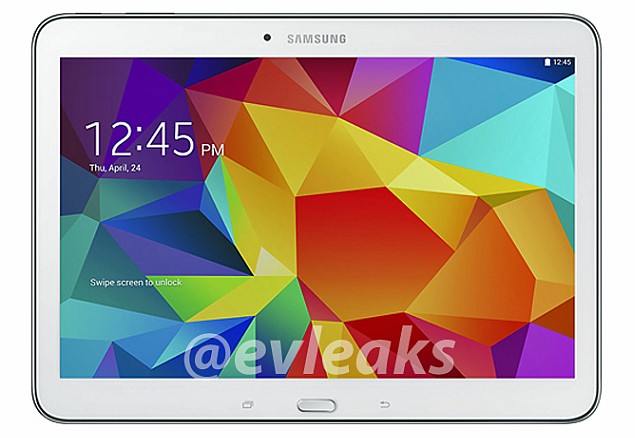 Samsung besides being rumoured to launch its Galaxy Tab 4 7.0 device, is also said to be working on the Samsung Galaxy Tab 4 10.1. The Galaxy Tab 4 10.1 has now purportedly been pictured on Twitter in a post by @evleaks, a popular smartphone and tablet tipster.

The tipster posted what looks like a press render of the tablet, accompanied by the words, "Samsung Galaxy Tab 4 10.1."

Based on previous leaks, the Samsung Galaxy Tab 4 10.1 is expected to run on Android 4.4 KitKat and like its predecessor, the Galaxy Tab 3 10.1, arrive in Black and White colour variants. Samsung's rumoured next-gen tablet is also expected to come with a 10.1-inch display sporting a 1280x800 resolution pixels, and be powered by a quad-core Qualcomm Snapdragon 400 processor clocked at 1.2GHz and paired with 1.5GB RAM. The Galaxy Tab 4 10.1 is also said to feature a 3 megapixel rear and 1.2 megapixel front-facing shooter.