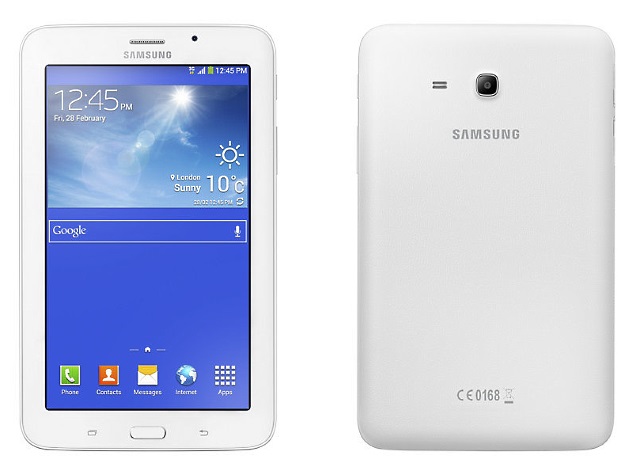 Samsung India, after launching the Galaxy Tab A and Galaxy Tab E voice-calling tablets last month, has now introduced the Galaxy Tab 3 V. The new tablet from Samsung is now listed on the company's India e-store priced at Rs. 10,600. The Samsung Galaxy Tab 3 V is listed as not available at the time of writing but can be expected to go on sale soon.

The highlight of the tablet is it supports 3G connectivity via SIM card; though it does not support voice calling. The tablet is powered by a 1.3GHz quad-core processor coupled with 1GB of RAM. The built-in storage on the tablet is 8GB, which can be expanded via microSD card (up to 32GB). The Galaxy Tab 3 V sports a 5-megapixel rear camera while there is no front facing camera on the tablet. It measures 193.4x116.4x9.7mm and weighs 322 grams. Samsung Galaxy Tab 3 V packs a 3600mAh battery.

Connectivity options on the tablet, apart from 3G, include Wi-Fi, GPS, Glonass, Bluetooth 4.0, and Micro-USB.

The Android 5.0 Lollipop-based Galaxy Tab A tablet came with an 8-inch TFT display with a 1024x768 pixels resolution; a 1.2GHz quad-core processor; 2GB of RAM; 16GB of built-in storage that's further expandable via microSD card (up to 128GB); a 4200mAh battery; a 5-megapixel rear autofocus camera, and a 2-megapixel front camera.