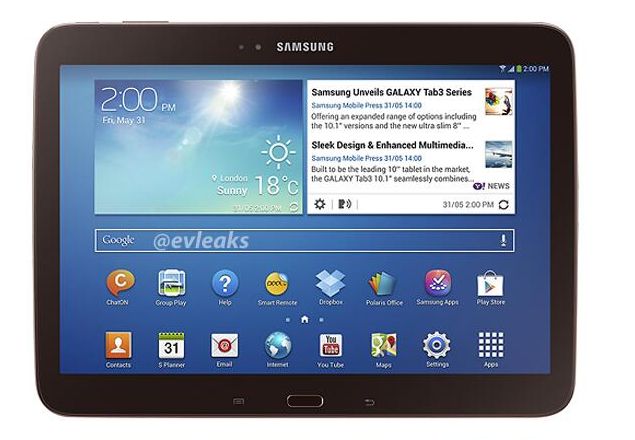 It looks like Samsung is experimenting with new colours for its third genetration Galaxy tab Android tablets.

Serial leaker @Evleaks posted press shots of a Gold-Brown colour variant of the Galaxy Tab 3 7.0, 8.0 and 10.1. Usually, Samsung offers its flagship devices in only White and Black colour variants.

Samsung had announced the 8-inch and 10.1-inch versions of the the new Galaxy Tab 3 just a few days back and had said that the tablets will be coming to markets around the globe in the beginning of June.

The 8-inch Galaxy Tab 3 is powered by a 1.5GHz dual-core processor alongside 1.5GB of RAM. It also comes loaded with a 5-megapixel rear camera and a 1.3-megapixel front facing camera. The device has a 8-inch WXGA TFT display with a resolution of 1280X800 pixels. Available in 32GB and 64GB variants, the tablet also offers expandable storage up to 64GB via a microSD card. The tablet offers a 4,450mAh battery.

Like the smaller variant, the big brother of the Samsung Galaxy Tab 3 series- the Galaxy Tab 3 10.1 has a 10.1-inch WXGA TFT display with a resolution of 1280x800 pixels. The difference between the displays of both the devices is noted with the 189ppi display on the 8-inch tablet against 149ppi on the 10.1-inch device. Powered by a 1.6GHz dual-core processor and 1GB RAM, the device will be available in 16GB and 32GB versions. Adding to the already existing memory space, the tablet also offers the option of memory expansion up to 64GB through an external microSD card slot. When compared to Galaxy Tab 3 8.0, the rear camera on this device is less powerful with a 3-megapixel shooter. This tablet has a 6,800mAh battery capacity.

Both the devices run on Android Jelly Bean 4.2 and will come in Wi-Fi only, 3G and LTE variants. They also come pre-loaded with Samsung applications and services such as Samsung Hub, ChatOn, S Translator, S Travel, Pop up Video and WatchON.

The 7-inch Galaxy Tab 3 was announced in April. The tablet will be available in two variants, Wi-Fi only and a 3G variant with voice calling. Under the hood, Samsung Galaxy Tab 3 is powered by a 1.2GHz dual-core processor alongside 1GB of RAM. The 7-inch screen has a rather disappointing 1024x600 resolution at a paltry 169ppi. The tablet will be available in 8GB/ 16GB storage options, expandable by another 64GB via microSD card. Connectivity options on the Samsung Galaxy Tab 3 include Wi-Fi, Bluetooth, USB and A-GPS/ GLONASS.

Galaxy Tab 3 is the successor to the Galaxy Tab 2 (Review | Pictures) that recently received a price cut in India and is now available for Rs. 12,750 and Rs. 16,250 for Wi-Fi only and Wi-Fi plus 3G variants respectively.
Comments