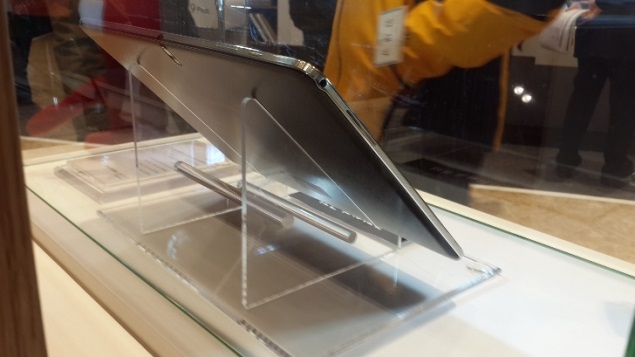 Samsung's long-rumoured 12.2-inch tablet, expected to launch as the Galaxy Note Pro, is said to be an addition to the company's Note tablet line-up, reveals a new report, which also provided a purported image of the tablet.

Phonearena in a report cites a Korean publication, and claims that Samsung's alleged Galaxy Note Pro, previously rumoured as Galaxy Note 12.2 will come with the company's S Pen support. The report mentions that the rumoured Galaxy Note Pro would be an addition to the Samsung Galaxy Note tablet range, which includes the recently unveiled Galaxy Note 10.1 2014 Edition, among others. The report further suggested that the alleged tablet featuring a 12.2-inch display will run Android 4.4 KitKat out-of-the-box.

Earlier, Samsung's rumoured tablet with a 12.2-inch display was spotted at the FCC. Rumoured specifications of the alleged Galaxy Note 12.2 tablet include a 12.2-inch display (as the name suggests) which is likely to boast a resolution of 2560x1600 pixels, a quad-core 2.3GHz Snapdragon 800 processor, and 3GB of RAM.

Also said to be on-board the Galaxy Note 12.2 tablet is 32GB of inbuilt storage, and an 8-megapixel rear camera, apart from a 2-megapixel front-facing camera. The rumoured tablet was earlier said to run Android 4.3 Jelly Bean out-of-the-box.

Recently, a report suggested that the alleged Samsung Galaxy Note 12.2 tablet would be going into mass production by the end of 2013, which ties in expectations of an unveiling at the Consumer Electronics Show (CES) in January 2014.