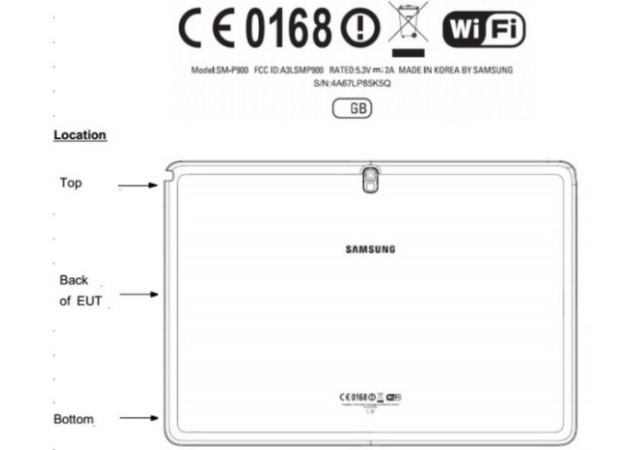 Samsung has long been rumoured to be working on a tablet sporting a 12.2-inch display, and now a new report claims that the alleged Galaxy Note 12.2 tablet has been spotted at the FCC.

As per a report by The Droid Guy, the alleged Samsung tablet that was spotted at the FCC (Federal Communications Commission) is a non-LTE, Wi-Fi only variant with model number SM-P900. The FCC listing also reveals design of the alleged tablet.

According to the report, the tablet comes with dimensions of 295mm (height) and 204mm (width), while there is no word on the thickness. The leaked FCC schematics of the alleged tablet also reveal a stylus port at the top of the device, suggesting that the rumoured Galaxy Note 12.2 tablet will come with stylus support as seen in earlier Note tablets.

Rumoured specifications of the alleged Galaxy Note 12.2 tablet include a 12.2-inch display as the name suggests, which is likely to boast a resolution of 2560x1600 pixels, a quad-core 2.3GHz Snapdragon 800 processor, and 3GB of RAM.

Also said to be on-board the Galaxy Note 12.2 tablet is 32GB of inbuilt storage, and an 8-megapixel rear camera alongside a 2-megapixel front-facing camera. The rumoured tablet is said to run Android 4.3 Jelly Bean out-of-the-box.

Recently, a report suggested that the alleged Samsung Galaxy Note 12.2 tablet will be going into mass production only by the end of 2013, which ties in expectations of an unveiling at the Consumer Electronics Show (CES) in January 2014.

Samsung has also been rumoured to be developing a 13.3-inch Android and Windows RT dual-boot tablet, as per a Korean report.