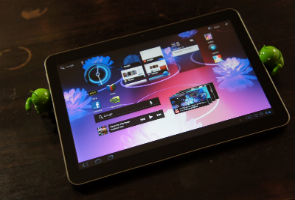 Highlights
Samsung and Blackberry have announced their tablet devices the Galaxy Tab 8.9, 10.1 and the PlayBook. Come April 9 and we will finally see some worthy competition to the iPad2, other than the Motorola Xoom.

Not only do these tablets compete with the iPad2 in the feature set, but in price too. While the Galaxy Tab 8.9 has a starting price of $469, undercutting the iPad 2 by a good $30, the Galaxy Tab 10.1 and the BlackBerry PlayBook both start at $499 matching the price of the iPad.

Seriously, someone should knock some sense into Motorola as they have literally rendered their Xoom dead-on-arrival because of its premium price tag.

The Samsung Galaxy Tab 8.9 and 10.1 both will be powered by Google's Android Honeycomb OS, which has already gathered a lot of critical acclaim in the Motorola Xoom. Both tablets are also the slimmest on the market piping the iPad 2's anorexia by a minute 0.036 mm.

On the flipside of things the BlackBerry PlayBook will boast of a smaller 7-inch form factor, which is similar to that of the previous Galaxy Tab, but its secret weapon will definitely be the out-of-the-box enterprise support. While the iPad aspires to become the go-to tablet for multinational corporations, the PlayBook will have rock solid security functionality built in courtesy the QNX OS whose security pedigree is well known in servers around the world including the US military.

Samsung has also put in some work in their Touch wiz skin and have released a tablet specific version called the TouchWiz 4.0 UX. Samsung is touting its tablets to be industry ready with its development partnered by IT giants such as Cisco, SAP and Citrix.

Now all the four tablets have very similar specs with all of them being powered by dual-core 1Ghz processors and 1GB RAM with the iPad 2 being the only one with 512MB RAM. All the four also boast of dual-camera functionality with the Galaxy Tabs and PlayBook having superior cameras to that of the iPad 2.

The main differentiating factor will be the respective application ecosystems and their form factors.

While the iOS already has a ecosystem of 65,000 apps, Google Honeycomb has entered the battlefield with a meager 100 Tablet centric apps alongside the 100,000 mobile Android apps. It will be interesting to see how BlackBerry develops the QNX ecosystem which will also support Android apps.