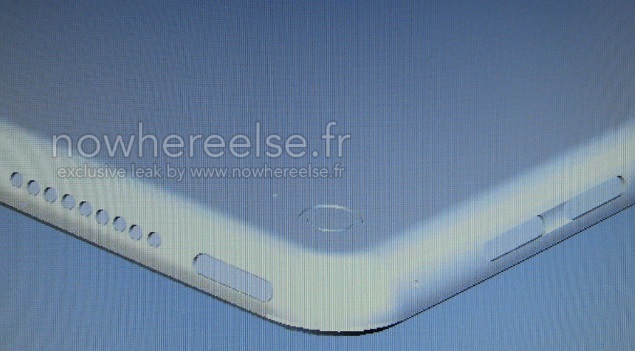 First spotted by NowhereElse.fr, the image is said to be from Apple's rumoured larger iPad that has been reported to launch in Q2 2015. Notably, the leaked schematics apart from showing the side of the larger iPad tablet, believed to be dubbed the iPad Pro, shows speaker holes placed right next to the power button of the tablet.

The leaked schematic indicates that Apple's next larger iPad tablet will come with stereo speakers near the power button, opening up the possibility the tablet will feature similar speakers on other sides as well.

The publication's source further claims that the iPad Pro tablet measures 6.9mm to 7.5mm thick, which 9to5mac points out this is "in line with the current iPad range."

Early in December, another set of leaked schematics hinted about size, design and processor of the iPad Pro tablet. In the leaked schematics, the tablet was tipped to be named 'iPad Air Plus', following the naming scheme seen in the most recent generation of iPhone handsets - iPhone 6 and iPhone 6 Plus. The iPad Air Plus was said to release sometime between April and June 2015.

Further, the rumoured iPad Air Plus was said to come with a 12.2-inch display. The device was previously said to feature a 12.9-inch liquid-crystal-display screen.

In December, a Japanese magazine had leaked a blueprint in its January issue claiming that the larger iPad tablet would measure 305.31x220.8x7mm (12x8.7x0.28 inches).

The magazine also added that the tablet would be powered by the Apple A9 processor, given the A8X processor recently debuted in the iPad Air 2.